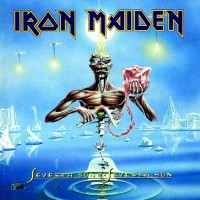 
Seeing the 80s and the band's golden era out, Seventh Son Of A Seventh Son is a high note to go out on. The band took a tighter embrace of their progressive tendencies but managed to balance this with their pennant for creating catchy tunes like they had for the decade up until then. Iron Maiden find a golden ratio that they have spent much of the rest of their career trying to replicate.

The band's sound has had a sonic evolution from Somewhere In Time with the use of keyboards and synths being placed much more prominently into the songs. This seamless incorporation allows the band to expand their sound, which in turn allows these elements on tracks like "The Prophecy" to be mixed in and become an integral part of the song rather than an addition on the side. Hell, who would have thought that the band who did "Hallowed Be Thy Name" et al would throw in a faux reggae breakdown in a track like "Can I Play With Madness"?

Featuring among its ranks some of the band's greatest hits, Seventh Son Of A Seventh Son is an album that stands tall on its quality. "Can I Play With Madness", "The Evil That Men Do", "The Clairvoyant" and "Only The Good Die Young" should feature prominently on any list of [band]Iron Maiden[/i]'s greatest hits. The songs are punchy yet broad in their appeal, and perfectly encapsulate the two sides of Iron Maiden: the band who write catchy metal hits and the band who aspire to immerse themselves in prog rock.

The band themselves are on the top of their game. Dickinson is in his element here, singing difficult yet catchy vocal patterns with such conviction that you can't help but listen in awe. Harris adds yet more notches onto his belt as both a songwriter and bass player in equal measure, featuring some of the best examples of his galloping fretwork. Murray and Smith handle their roles with ease, leading the listener through the songs and progressive passages to ensure listeners don't get lost and their minds wonder off.

Birch again shows why he is the band's secret weapon; he gives the band a sound that is concise, punchy and encapsulates all of the competing sounds without any of them feeling out of place nor hidden behind anyone else. Given the level of experimentation on this record, it is something that had the potential to have gone spectacularly wrong.

As much as I enjoy the album there is one song that just does not click with me no matter how many chances I give it; if the songs were ice sculptures upon the frozen sea behind Eddie on the cover art then "Infinite Dreams" is a melted puddle on the floor. For an album steeped in grandiose and adventurous sounds, it is a track that sounds so pedestrian for a band of this calibre.

Seeing off a run of albums that many aspire to replicate but ultimately fall short of, Seventh Son Of A Seventh Son caps it off in style. To say it is recommended is an understatement; much like most of Iron Maiden's albums it is mandatory listening for anyone who wants to be or is a metalhead.