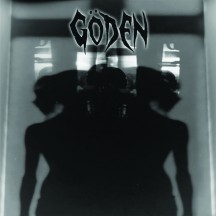 Considering how overlooked this album was, I can't say I really blame bands for keeping the old recognizable band name when reuniting after decades even if only a handful if any of the original members are involved. Winter did briefly reunite last decade, but only for some live shows, but at least that reunion had all original members. I would've loved a new Winter album, but whatever happened happened. At least Göden had the decency to get a new band name, taking their name from a Winter song, though two of the four people who performed on Into Darkness being here is a pretty good track record. A whole lot of reunions don't even get THAT. And you know what, 30 years after it, Beyond Darkness is a pretty good spiritual successor to Into Darkness. Though now I can't really think of a new wordplay for "Darkness" that would fit any follow-up.

Göden takes original guitarist Stephen Flam and original keyboardist Tony Pinnisi, and teams them up with Hanzel Und Gretyl's Vas Kallas handling the vocals (giving each of the three some wacky nicknames), as well as a bunch of session musicians doing drums, guitars and violins for that extra doom atmosphere. Due to the drumming not necessarily being such a huge part of Göden's sound, the fact that not every track has the same drummer doesn't really affect the album's consistency. And even though I can't say I was too familiar with Hanzel Und Gretyl, I can say that Vas Kallas' vocals fit like a glove over the sinister dark doom. The sound is obviously pretty similar to Winter in that it is a very atmospheric and riffy take on death and doom metal, but one clearly more matured from its predecessor, and with more emphasis on doom rather than death. Lacking a bit of that frost, but making up from it in massive soundscapes, a narrative feel from those "Manifestation" tracks, and riffs for days.

The thing is that while Beyond Darkness has a great sound, the thing is 70 damn minutes long, and I can't really say that it has enough ideas for that whole runtime. They do make up for the length by having a pretty immersive atmosphere, but it well overstays its welcome. It takes its sweet time, everything feels overstretched, not always to its benefit. But sometimes it also has its own appeal, like some unending cruel darkness. And this albums reeks of sinister darkness. It's even in the damn name. And if anyone has the right to do some sinister dark death doom, it's the people who were there thirty years ago when it was created. So, even if I would've liked at least 20 minutes cut off from this, maybe I should be grateful that we get our money's worth of death doom from that three decade absence, during which I think many people eagerly awaited anything from the Winter camp.

Also do yourself a favor and listen to Into Darkness if you haven't already. It's a classic. And now they are somehow back, and we also have both a Winter track called "Goden" and a Göden track called "Winter".

Written on 06.07.2020 by
RaduP
Doesn't matter that much to me if you agree with me, as long as you checked the album out.
More reviews by RaduP ››