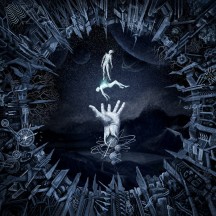 
01. The Dissolution Of Mind And Matter
02. Vigilance And Atrophy
03. Five Of Swords
04. As The After Becomes The Before
05. Cosmic World Mother
06. Helminthiasis
07. Oscillator Epitaph
08. In Abhorrence Upon Meadows
09. Apokatastasis
10. One Of Light, One Of Soil
11. The Flickering Lights


Forget everything you knew about ...And Oceans. And if you didn't know anything about them, let Cosmic World Mother tutor you on their absolute rollercoaster of a career.

Initially formed under the pretense of writing relatively raw sounding symphonic black metal in the late 90s in the wake of Festerday's demise, the band quickly underwent a change of pace in their efforts to branch out towards the electronic side of things, establishing themselves firmly under the industrial umbrella while retaining a black metal veneer throughout their brief tenure in the scene. Obviously comfortable with expanding on their origins and becoming more experimental with their songwriting approach, thanks largely to former keyboardist Antti Pasala, who helped craft ...And Oceans' signature style, these Finns swiftly faded into the background, not to be heard from again until their resurgence as Havoc Unit. The short-lived project was responsible for 2008's h.IV+, a concentrated continuation of the band's industrial leanings, only for them to evaporate soon after. Cue the return of Festerday, dropping an old school death metal album in 2019, thereby triggering the inspiration for ...And Oceans' grand return with Cosmic World Mother.

Now, not entirely in spite of, but also not due to the nature of their amebic history, the band steps into center stage with an unorthodox return to an orthodox form, drawing on their traditional symphonic foundation by means of a driving, encompassing keyboard onslaught. It tends to carry most songs and set the tone for the album's entirety, momentarily easing off during the more simplistic plodding, but mostly acts as the lead role. That will be a make-or-break feature depending on one's personal preference, as its blanket-like covering can be difficult to digest if only for its overwhelming levels in the mix, but it does make for a classic sound that will tickle some nostalgia bones. With synth work competing only with the impassioned raspy belting and guttural shrieks of newly featured Vreth of Finntroll renown, your eardrums will be putting in some work before the end of the album's 47 minutes just to sort through the dichotomous assault they're being subjected to. In addition to the already bludgeoning wall of sound, the guitars make sure to speak up here and there, though are often mired in uninteresting sub-plots that meander in the background and chug along for far too long at times, with hints of catch and groove seeping through the lens before once again being drowned out by an overzealous synth passage. The lead guitar isn't afraid to show off some of its own dialog during scenes of intensity, but those are unfortunately few and far between in an otherwise high-octane release.

Cosmic World Mother is a capable symphonic black metal album, proof positive that years away from the project hasn't left ...And Oceans in a state of emergency, desperate for sources of creativity or inspiration, but it never quite elevates beyond anything worthy of admiration. The flaws in songwriting and production are significant detractors while the positive elements, specifically the vocals and intense pacing, just aren't enough of a "wow" factor to entice repeated listens. Perhaps with more familiarity over time with this new lineup, we'll see a complete album deserving of their potential, streamlined and neatly packaged, worthy of praise. Until then, this resurgence is but a warmup -- a precursor to something better.