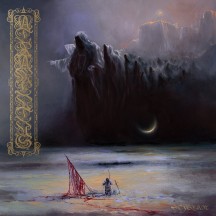 
01. Stygian I: From Tumultuous Heavens... (Descended Forth The Ceaseless Darkness)
02. Stygian II: In Ageless Slumber (As I Dream In The Doleful Embrace Of The Howling Black Winds)
03. Stygian III: Perennial Voyage (Across The Perpetual Planes Of Crying Frost & Steel-Eroding Blizzards)


Turns out the slow gurgling vocals of caverncore work just as well when slowed down on some funeral doom.

It was enough to gaze my eyes upon the Mariusz Lewandowski cover art to know that this one would be immense. It being released by 20 Buck Spin is also a good indicator of quality. But I still don't think I was prepared for funeral doom this icy. I knew I had to review it and after some additional spins I was already sold. And once I was already sold, just then did I find out that Atramentus are basically 3/4 of Chthe'ilist with another drummer and a keyboardist. So that's another thing, but it's not like I really needed any extra convincing. As much as I was already starting to feel that Lewandowski's impact was getting a bit stale, this comes around. Anyway back to the music.

Turns out that the music on Stygian was actually composed around 2012, but it was shelved, then recorded once a lineup was assembled around 2018, then shelved again, then released by the good lads over at 20 Buck Spin, so eight years later we finally get to hear something that likely would've been just as immense if it was released in its time, or maybe it needed to capitalize on Bell Witch revitalizing the genre. But something about the songs taking so long to finally come to life does make me feel that they'll also age like fine wine. Stygian follows the story of a knight that is granted immortality by God, only to witness the death of the Sun, and, by extension, of all life on Earth, and being immortal as he is, he has to wonder over the frozen lifeless planes unable to die. Pretty chilling once you think about it, but it's not like that's the first time God would make someone suffer for eternity just because.

And though I've had my quarrels with funeral doom at times, it often being too caught with trying to be overly long and overly slow to create a sense of atmosphere while forgetting to make it either immersive or engaging (in simpler words: it's boring); I can't deny that when it's done right, it's absolutely amazing. We've had some great funeral doom albums just this year, Drown, The Funeral Orchestra and Descend Into Despair come to mind, but there is something about Stygian that just feels grand. On the surface, there isn't much that is changed from the usual funeral doom formula: it's slow, it's crushing, it's depressing, the vocals are harsh, but sometimes not, there are periodic mellower sections. All the usual boxes. And yet, by God, this feels like aeons ahead of the average funeral doom.

For one, the pace isn't always that slow, or constantly glacial, and when it is glacial, you actually feel it being glacial in every sense of the word. And when the pace is picked up, it still stays pretty funeral doom-like instead of suddenly becoming some bludgeoning pause of doom death. But their mastery over pace isn't enough, they manage to somehow make the damn thing sound both minimalist (as most funeral doom is) and very well layered, with the synths especially playing a tremendous role in the immersiveness of the atmosphere. With the second of the three tracks being basically a bridge, obviously a mellow ambiental one, it's great that the sense of ambiance does seep into the other two songs.

And somehow, it also takes a few nods from epic doom and atmospheric black metal, especially in the choral-like synths that permeate the record and give it an even more grandiose feeling that the one it already had. Synths, pianos, vocals, actual guitar solos and those drums that they had to wait all those years for since they didn't want to compromise with some drum machine, they all pay off to create an extraordinary sound. And though you'd have to check the lyrics to make sure, the music alone gives it something that is so nearly impossible to achieve with a music album: a sense of world-building. And an ending that finally breaks free from the confinements of funeral doom, and that is worth the journey through the two gargantuan tracks (and a bridge), that I still can't believe only make up 45 minutes.

And then there's the vocals. Everything else apart from this was already making up every ingredient of a massive album, but the gurgly vocals feel so unusual and so fitting at the same time. Though they definitely fit perfectly in the doomy and dissonant death of Chthe'ilist, hearing them in this context tingles just outside of the uncanny valley, as in right where the enjoyment is at peak. Though I've heard them compared to Inquisition's, I can give a bit of credence to it, expect that this time around they're great and improve the music instead of the exact opposite. And when blended so masterfully with the backing vocals and the choirs, the impact is so much more immense.

Written on 29.08.2020 by
RaduP
Doesn't matter that much to me if you agree with me, as long as you checked the album out.
More reviews by RaduP ››