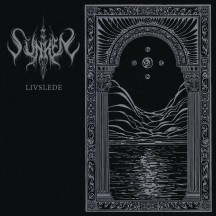 
Capturing the essence of melancholia in grandiose fashion is a task frequently sought after, yet rarely achieved.

Having renamed themselves and undergone significant lineup changes, Sunken's journey to releasing their full-length debut back in 2017 was a more tumultuous one than most would have the misfortune of experiencing, especially with how quietly their initial notable steps onto the scene were received. Not to be stowed away and forgotten in the dark corners of the internet, however, vocalist Martin Skyum Thomasen took a hands-on approach and engaged with the community in order to ensure this small Danish outfit had the opportunity to be heard this time around, and Livslede is definitely an album worth hearing. Moreover, it deserves to be felt.

Gentle resonating strokes of a piano set to the backdrop of running water acts as an introduction to the beginnings of a harrowing emotional undertaking, simultaneously establishing a depressive tone and symbolic representation of the oncoming cascading waves of sorrow and angst immediately. The intensity is exacerbated by massive haunting keyboard passages that engulf the listener in a wall of despair, drowning out the accompanying blast beats like heavy rainfall masking the tormented screams of a disturbed mind in the night, buoyed by daunting melodies and crashing cymbals for full immersive effect. Sharply executed leads sashay through oceans of guilt and remorse, eventually landing on the jagged shore rocks riddled with ghosts of the past and mangled dreams of hope, contorted by the oppressive onslaught of relentless waters beating down on them. This is atmospheric black metal, but not as you know it. It's ferocious and spiteful, crushing and manipulative, but it also feels beautiful and comforting in its own way.

Subtle mid-paced gazing sessions slither and snake their way into the fold seamlessly, taking the reigns momentarily to assuage the pain of this extreme self-loathing session, recurring throughout the rest of the experience when the intensity simply becomes too much to bear. These built up breaks prove Sunken's decision to add a second guitarist to the equation was necessary, as the songwriting dynamics benefit immensely from it, particularly with how readily they transition between which emotions they want to convey. At times traversing grief by means of forcefully stripping you down until you have nowhere to run, other times providing space to gather yourself and prepare for the next round, the lulling harmonies are careful not to ever let you stray from the course at hand. Rather than letting you watch silently from a distance, you're made to share and endure the process in its entirety -- every discomfort, every regret, every agonizing step to the bottom of the ocean, where Livslede resides.