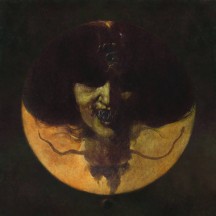 
Akhlys having to follow-up The Dreaming I sure is a massive task.

With the project originally starting off as more of a dark ambient project than a black metal one, as apparent on 2009's often overlooked Supplication, Akhlys reinvented itself as the swirling black metal project that blew everyone's socks off, including mine, with the massive The Dreaming I, which ended up being one of my favorite black metal records of the past decade, and one that got Akhlys a lot of notoriety, and hence why Melinoë was so anticipated, maybe even more so than a Nightbringer or an Aoratos record.

For one, it seems like Melinoë is a bit more of a group effort than The Dreaming I, though there is conflicting info on that so far. In an case, Akhlys has become a bit more than just Naas Alcameth's (also of Aoratos and Nightbringer fame) project, and it embraced a few Aoratos bandmates into the ranks. To what extent they're participating on Melinoë isn't something I've been able to find, so I don't want my confirmation bias to say that "you can definitely feel it being a group effort" while listening to it, as much as the Bandcamp page states: "The most group-oriented iteration of Akhlys to date here". Regardless, Melinoë continues to build on Naas work of making black metal seem as much as possible as an impregnable nightmare.

Akhlys's music, and the rest of Naas' works to an extent, work perfectly to merge the black metal and dark ambient sides of music to encapsulate the feeling of being stuck in the dreamworld, a dreamworld that is perhaps more mythological, supernatural and malefic than just some mere synapses of the physical mind. Perhaps this is why much of the album finds inspiration not only from Naas' experiences with nightmares and lucid dreaming, but also different myths about dream gods and demons, with the album's name itself being taken from the daughter of Persephone. Such esoteric themes certainly lend themselves well to the more ambient-focused side of black metal, with its repetition of patterns and dark distortion, all blended with the haunting synths that remain from Akhlys's dark ambient explorations.

However, Melinoë feels like it lacks the impact that The Dreaming I had, purely because of how much that album served as a gateway for many people, including myself, to the dreamworld of Naas' works, and with the entirety of Nightbringer's catalog, and the recent Aoratos and Bestia Arcana records that came since, it doesn't feel like Melinoë is doing anything different in evoking the same feeling, other than perhaps just chiseling the sound. Naas is extremely lucky that no other band came close to achieving the same effect since, and that he lost none of his skills in bringing that cloak of evil sleep over us. As much as I would've liked to be taken by surprise at least once, I can't deny how comfortingly eerie Melinoë, like a recurring nightmare that you're actually looking forward of falling into again.

I should mention that the performances are fantastic, the songs entrancing and the production fitting. But I don't think anyone doubted those. It is what it is: the stuff of dreams.

Written on 26.11.2020 by
RaduP
Doesn't matter that much to me if you agree with me, as long as you checked the album out.
More reviews by RaduP ››