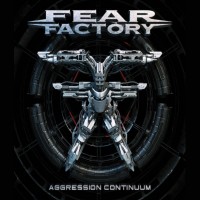 
Expectations were high for this album. Singer Burton C. Bell, up until now the only consistent member of the band, has quit Fear Factory for the third and presumably final time. While guitarist Dino Cazares confirmed that Fear Factory will continue without Bell, many longtime fans remain skeptical whether any future replacement singer can live up to Bell's legacy and would therefore love to see the "old" Fear Factory go out with a bang. Originally recorded in 2017 and announced by Burton C. Bell with the title Monolith and different cover art in late 2018, Aggression Continuum has spent quite a long time in the oven, with drums and guitar tracks being re-recorded down the line.

Fear Factory set the bar high with their sophomore album Demanufacture and have continuously criticized the music industry for treating art like a product and artists like clones created for slave labor. With all this in mind, fans may be disappointed at first that Aggression Continuum does not reinvent the band's sound, let alone the genre. However, what it does do is bring out the best in the Bell/Cazares combo one last time.

There is a formula for a typical Fear Factory song: Start with an (optional) electronic intro, sometimes with movie samples on top of the keyboards. Start the song proper with riffs and drums in perfect sync with each other. Growly, angry, machines-of-hate verses. Clean, harmonic, last-shred-of-humanity vocals for the chorus. A lot of songs from previous albums stray from this blueprint for a bit of variety, but Aggression Continuum mostly plays it safe by sticking to it. Therefore, you will be forgiven for feeling that you've heard it all before. However, sometimes the riffs and ceaseless double kick drumming demand angrier growls and the choruses are more soothing and harmonic than usual. These songs often end up with the perfect growl-to-clean ratio, with particularly angry verses emphasizing the clean choruses, which in turn will give the instrumental parts more punch.

While a good chunk of the album relies on the tried-and-tested formula, there are songs that stick out due to a good balance between the aforementioned components, thereby highlighting the strengths of Fear Factory's unique sound. Based on your preferences your mileage may vary, but I personally found the second half of the album more catchy thanks to songs like "Cognitive Dissonance", "Monolith" and "Manufactured Hope", though the first half has its highlights as well with "Disruptor", "Fuel Injected Suicide Machine" and the opening track "Recode".

As expected, the production is solid and up to the band's standards, with crisp audio quality and precise riffing and drumming. Cazares contributes his signature industrial and groove riffs while Mike Heller, drumming for the band for the second time after Genexus, proves that he can indeed keep up with the band's previous drummers, including longtime member Raymond Herrera, veteran Gene Hoglan, and (fittingly or perhaps ironically) a drum machine. The bass on the other hand is just there, but doesn't get much time to shine. Not that it needs to on an industrial metal album where the programming is more prominent, with electronics adding atmosphere to the music.

Unfortunately there has been a slow but steady decline in Bell's vocal performances over the last couple of albums, and Aggression Continuum is no exception. That's not to say that the vocals are bad by any means, but they could have been stronger if Bell were still as energetic as he was on the 90s albums. Alas, voices change with age and after all, he did quit the band at a point when it still pains the fans to learn of his departure.

His lyrics, on the other hand, are strong as ever, having always provided Fear Factory albums with themes and concepts. While they have covered wars of man versus machine in post-apocalyptic environments before, this time the narrative is set in the early days of such a world, as humans unite to form a resistance and start to fight back. A fitting setting for Bell's swansong as it makes the harmonic, human side of the soundscape more bittersweet.

If you're in Team BCB and consider this the final Fear Factory album, you may find it a satisfying conclusion to 30 years of brutal yet catchy music. However, if you're not too bothered with a band getting a new singer after 3 decades, you can view Aggression Continuum as the golden standard for the band against which future releases can be measured. Good luck to the new singer, whoever it will be. You got a lot to live up to.