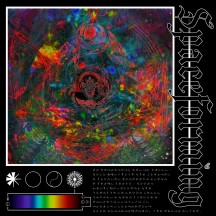 
01. Lord Of All
02. Immanis Diruptio
03. Wuji / Taiji
04. Rūăḥ-𒀭-Naṭarāja, The Primordial Architect
05. The Psycology Of Creation
06. Smoking Opal And Laccaria Masoniae
07. Spaceforming
08. Polonium Based Lifeforms
09. Dawn Of The Magnetar
10. Corium Dew
11. Requiem For The Forgotten Land Of Aris And Its King Targon
12. Moiieinzkiuw, The Relics Eater
13. The Pulsating Cathedral Of Rotten Flesh, Molybdenum And Bufotenin


A badass concept that lends scope, mood, heft, and a story to droning riffs, hypnotic tremolos, pulsating noise, and moody synthscapes scratching that Locrian itch. Spaceforming is cinematic and vibrant yet thoroughly nihilistic, and recommended if you fancy atmospheric music with a sharp bite.

Black hole recordings sound less like causality breaches and more like bleeping, sweeping, creeping Spaceballs, but what does expansion sound like? How many prime movers does it take to light a Big Bang-bulb (I bet it's a prime number)? Does the "Lord Of All" still dream of Spaceforming, or are we left to dream alone? Is even one of these questions nearly relevant to an album review? Not likely, but they give a sense of what "show, don't tell" is all about. Conveyed only by song titles, a short summary on Bandcamp, and mostly instrumental music, Staurophagia's artistic vision soon comes across as quite concrete. Seeds sprout like space-time pockets in cosmic inflation, and I find myself not only along for the ride, but allowed enough imaginative control to feel like an actually useful backseat driver.

A soothing post-rock warmth starts off the album, but for the entire runtime, this serene mood never quite returns. Instead, it swells into a nebular cacophony of glitchy buzzing, light-bending analogue synth pads, and searing guitars building up to "Immanis Diruptio" (The Big Bang). Blast beats enter to kick up an undulating riff, see it hooked to a trebled guitar lead, and then return whence they came as the dust settles and dissolves into an intimidating brass hum. The dynamics of Spaceforming take shape, and this ebb and flow between throbbing, hypnotic black metal and ominous electronica remains rather steady throughout the album. That said, there are frequent standout moments in many songs that give them a character of their own while still being connected to the flow. The mantra-like guitar hook carrying (encoding gods, have mercy) "Rūăḥ-𒀭-Naṭarāja, The Primordial Architect" sets a deceivingly melodic stage. Then, "The Psycology Of Creation" seems to grant Spaceforming's ebb and flow a shape of its own, empowered by an oppressive yet vibrant industrial march. Strange, distorted screaming (which there is quite little of, generally) oscillates behind intricate blast beat patterns and forceful, Cascadian-style tremolo leads on "Polonium Based Lifeforms". The rest of the highlights I leave as an exercise for the reader to find, as they say. They are plenty.

At first, I didn't quite get into the album, on account of its production not quite working in its favour. Especially the drums sounded odd to me, at first, but as the album's grip on me tightened, I felt less so. The snare sounds crisp and tasty, and always did. Most of the percussion mix lies generally in a saturated high register, except for toms that could have used some more boom, and a kick drum that often borders on an electronic-sounding "disco" thump. By now, I think this makes sense, as the electronic elements are a large part of the album, and the sterile, maybe even "rusty", timbre of the drums gives the album a futuristic flavour.

The album drags towards the end, and the first half is clearly more memorable. It works well for both background and attentive listening, due to the breathing dynamics and a mostly steady beat. It is not music that takes a lot of effort to get into, nor entirely unchallenging. At least for me, it took a spin or three before I got swept up by Spaceforming's many moods and let the music conjure up images of this eternal return to chaos and back, recurring through the aeons, driven by cuneiform-named entities starved of meaning beyond outerest space (or so I've gathered). Without its concept, it would have been a solid album, and your enjoyment may vary depending on that storytelling factor. It works very well for me.