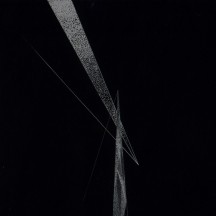 
Much like their namesake phenomenon, Decoherence are equally terrifying and interesting. Existential dread can dance.

Marketed as a proper studio album, System I is technically a compilation of digital singles released throughout 2020. The first few seconds of System I had me grinning like an idiot for I don't know how long. It didn't only sound quite like nothing I've heard before, but like such an obvious direction in which to take the Ye Good Olde Darkspace & Blut Aus Nord & Co. style and expand upon it. How? Well, the Killing Joke cover should give you a hint. What's remarkable is the way in which none of the aspects we know and love in this sort of industrial, dissonant music seem sacrificed, but rather revitalised, in the process. Yeah, post-punk has been a popular influence in black metal for many years already (to the point of becoming a trademark of the Icelandic scene), but not quite like this, I think. The way it adds to the density and impact rather than let in some air and tone it all down is a very cool party trick. System I is highly uncomfortable and highly entertaining, and the contrast creates some very captivating compositions.

Decoherence's themes fit the music to a tee, their namesake being the indeed terrifying yet danceable phenomenon of the observer effect. Like that trigger-happy Persian used to say, nothing is real and everything is permissible. At least until a system interacts with its surroundings, and collapses from multiple possibilities into one irreversible reality, that may well differ between you and me (he didn't quite get to that last part, back then). The album title seems to comment upon this apparent end to objectivity, and asks, "but then, what is this system that is I?" You wouldn't know until you actually had a look, see, and what you now see tells you nothing you didn't already know, which is, quite simply, less than before. Moreover, what you see is not necessarily what another sees, and no picture is more real than the other, because "reality" and "truth" are rendered quite dubious as concepts at large. Science reached out into the unknown, and has by now ended up inside the mind of the scientist, again looking out, only with more existential dread. It is literally no longer an endeavour in determining what we know, but what we can know, and in the process we have lost our previous ability to presume that we ever knew.

These are the possibly nightmare-inducing mysteries inspiring Decoherence, as far as I can tell. Leave it to this trio to write terrific songs about these "Dichotomic Observables". Now, I wouldn't go so far as to start making puns like "disco-herence", as that would give the wrong impression. There is nothing so jovial about this album. The overpowering drums alternate between resounding mid-pace beats, speedy venomous blasts, and martial grooves. Even between beats, they often reverberate with enough force to fill the room. Meanwhile, the guitars churn out anxious, trance like riffs in buzz saw tones, and now and then roam free into discordant, shrieking flourishes. The synthesisers add a lot to the steady groove and uncomfortable mood often present, but are subtle enough to never take the stage. Instead, they reinforce by warbling along to the beat when not filling out the low-end of numerous calmer sections, such as the mid-song break in "Ray Spallation". Yes, the double slit experiment it refers to is a cause for heavy concern. The vocals, while never at the forefront, make these metaphysical implications of quantum mechanics convincingly alarming while adding welcome emphasis throughout the album with a hollowed out, echoing, yet human touch.

Much like a tasty pint of science-funded solipsism, System I is as addictive as it is unsettling. I was hooked from the thumping outset of "Line Of Force", impressed by the off-beat drive of "Gate Error", convinced by the vitriolic riffs of "Non-Holistic Constraints", amused by the cover of "The Wait", and then hooked all over again from the start. System I is easily the next best thing I've heard all year, and I look forward to hearing a lot more music like this in the future. Oh, and that album cover says more than a thousand words, as pictures are supposed to do.