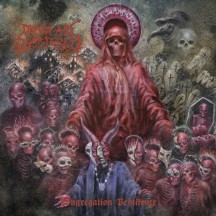 
How about some nasty, malevolent, dissonant, and murky death metal? I am talking to you Morbid Angel, Immolation, and Incantation fan; have you not heard Drawn And Quartered yet?

Drawn And Quartered were formed back in the '90s and have now eight full-lengths, with the latest one having just been released last month. Hail Infernal Darkness is their undisputed peak but, while listening to their entire discography, consistency is the first thing that comes to mind; the band has a solid formula that is working and there is not any huge variance across releases.

What I immediately noticed and liked about Congregation Pestilence is that it is a riffy album that doesn't neglect the lead guitar. The vigorous and dissonant riffing is peppered with some really deranged and evil-sounding leads. I mean, the riffs are devastating and they serve the purpose of demolishing everything in sight but it is the lead sequences that create a very ominous atmosphere for maximum impact. The musicianship all around is high-level too.

My favourite song would be "Six Devils" (Trepanation) because it has that groove that stays in memory long after it's finished, it has the coolest solo, and the drumming on it stands out from the intro to its last seconds. The title track would be my second best pick; it the slowest song on the record and it is a great doom death metal specimen.

The production of this is unfortunately on the compressed side. Moreover, the guitars sound a little thin in the way it normally happens on black metal releases and I felt that the drums needed more oomph because the mix doesn't do them enough justice. The bass is treated well though and the instrument provides a nice, muscular undercurrent.

If I had to guess why Drawn And Quartered are not more popular among death metal fans, I would go for lack of originality. Their albums are good and this one is actually really good but I cannot shake off the feeling that I have heard it all before. Still, this is the kind of creepy, dissonant, and uncomfortable kind of death metal that should appeal to those who worship Dawn Of Possession, Blessed Are The Sick, and Onward To Golgotha. And it is very well made.