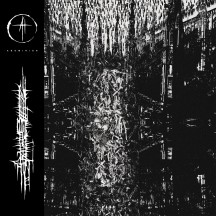 
Q: Do you prefer your death doom with more death or more doom? A: Yes!

By now I'm going to assume that you're aware that extreme metal exists and that it takes many forms. Abstracter has taken many forms over the years, with bits of post-metal, sludge metal, black metal, crust punk and the like all having permeated their previous records. Abominion has some of that. But it mostly decides to go in two completely different directions: the most extreme of doom metal and the most extreme of death metal. And perhaps not extreme in the brutality sense, since most brutal death metal bands are, as the name implies, more brutal, but there's a filth that reeks and oozes from Abominion. A je-ne-sais-quoi that just makes me think that this is the logical conclusion of death doom.

There are debates to be had about the terms "death doom" and "doom death", since they should ideally not be used interchangeably. And granted "doom death" does seem like it describes the sound a bit more accurately, but Abominion's beauty lies in how perfectly it balances the two elements, instead of being doom or death with strong shades of the other. When the songs casually go over seven minutes, it's clear that the pace has the space necessary to slow down for the doom parts, with the funeral doom often in danger of sounding like very very slow death metal, but infused with such a dark ambiance that really sets it apart. And when the pace picks up, it's caverncore of the most exhilarating kind, striking a balance between crushing at high paces and hypnotizing at the low ones.

It's all pretty simple, and extremely well-executed, even if you can clearly tell that it takes inspiration from a variety of sounds, the way these are incorporated is subtle enough that it enhances the atmosphere without making it feel like there's much more at stake than really good death doom. But keep your ear firmly planted and you can hear bits of Swans, Godflesh or Triptykon among others. And in a way it's not the most crushing, nor the most nauseating, nor the most suffocating, nor the most filthy, nor the most apocalyptic, but it's one of the best cases of both components of the sound working to make each other feel stronger.

Written on 01.10.2021 by
RaduP
Doesn't matter that much to me if you agree with me, as long as you checked the album out.
More reviews by RaduP ››