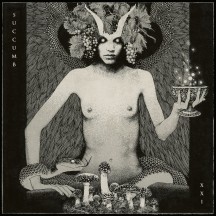 
I'm sorry, I cannot think of Succumb without also thinking of... uhh...

Awful memes aside, Succumb's self-titled debut from a couple of years ago was one of the most promising death metal debuts in recent memory, showcasing a band less interested in just trailing the OSDM path. There's no shortage of death metal bands already playing around with doom metal, hardcore and black metal, but the way that Succumb crafted their sound around these has made them fairly unique. Everything from the vocals to the blend of sounds to the killer songwriting promised that these would get honed even better in a follow-up. And four years later, here it is. To say that I've been anticipating this is an understatement.

The most make-it-or-break-it thing about Succumb's music, and probably the reason why their debut has such a ridiculously low rating here, is the vocals. Let's say that Cheri Musrasrik's vocal performance is not something you usually hear in a death metal band, seemingly more fit for something like hardcore or sludge, but I guess that was precisely part of the appeal for me. Bassist Kirk Spaseff also contributes some vocals, with his growls giving the album an even more multi-dimensional vocal field. And in some way, Cheri's vocals are pretty "clean". And I have to say that there are clean vocals, I mean something more akin to howls and snarls, nasty vocals but distinct enough from the "unclean" growls. You'll know it when you hear it.

The music itself feels a lot more dissonant and chaotic than previously. Somehow the upped mathcore dimension of the record makes Cheri's vocals fit even better compared to the more straight-forwardness of the debut. And it XXI is more chaotic, that doesn't mean that Succumb aren't clearly in control of their sound, switching between dissonant noise to pummeling riffing to quasi-blackened atmosphere with ease. It's hard to pinpoint an element that ties it together, whether the commanding vocal presence, the riffing, or the insane drum performance from Harry Cantwell, but XXI's ambition in songwriting should make it fall apart, but it doesn't. Hell, you even have "Graal", which is not content with just the blackened and the hardcore additions, but it slowly descends into Godflesh hell too, before promptly amping the powerviolence chaos again.

It's basically an improvement on all fronts: the production suits it, the performances are insane all around, and the songwriting might be a bit too all-over-the-place at first glance, but repeated listens have cemented it as one of the most memorable experiments in chaos.

Written on 10.10.2021 by
RaduP
Doesn't matter that much to me if you agree with me, as long as you checked the album out.
More reviews by RaduP ››