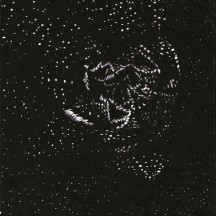 
This is a monstrosity of an album that will not leave any listener indifferent. Depending on whom you ask, this is either high praise or an insult. Be prepared for a hellish and bizarre experience like no other.

The Canadian trio of Antediluvian quickly carved a name for themselves with their debut Through The Cervix Of Hawaah. The bestial style of black/death metal on that record was eerie with a misty, noisy production that made the whole affair sound frighteningly unstable. The following album, λόγος, had an even more extreme approach with a far denser, bass-heavy sound. It was a more chaotic beast, with even fewer sections that held any form of structural integrity.

The Divine Punishment marks the first full length in 8 years. With a monolithic length of over an hour, it’s almost like getting two albums. Let me assure you, my friends, few people will be able to stomach this release in one go. However, I implore you to push forward, for there is not a single song on this album that won’t make you ask yourself what the hell you are listening to as every odd feature unfolds before you. For each musical aspect you’d come to expect from relentless black/death metal of the cosmic-horror variety, Antediluvian takes it too far into the weird and unacceptable.

Haasiophis’ vocals are among the most deranged and virulent you could ever find. He sounds like different types of demons crying, whispering, moaning and growling all at once. The growls, which take most of the spotlight, are so low, gargling and caustic that they seem to fit better with a grindcore band at times. They will most certainly turn some people off, but one cannot deny the otherworldliness they provide with their disturbing tone. The intensity of the riffs is doubled by their erratic behavior. The structures shift. The riffs shift. Everything does, yet the atmosphere remains the same: Of pure chaos and darkness. The constant change of tone and pace gives the album an alarming, dangerous vibe. The mixing makes them sound completely alien to an almost psychedelic degree. This is particularly true with the leads and solos; that poor guitar has been stretched through infinity by a black hole summoned by Yog-Sothoth. Just marvel at the musical massacre that is “All Along The Sigils Deep”. It is disorienting, lunatic and so delightfully sickening. Some other times, like on the track “How The Watchers...”, the leads become melodic and just barely hold everything together, perfectly portraying the slow death of all sense and mental stability. However, if there is one element that every listener should be impressed by, it is the drumming. Mars Sekhmet is a true master of her craft, and I’m yet to find a drummer which such a mental style. It is primitive yet highly intricate, with a very present tribal sound that adds so many flavors to each song. Putting them just a bit above everything else was a smart move, as they provide the glue that holds this cosmic chaos together and heavily complement the wildness of the riffs and solos.

I feel like I could go on and on and on about all the outlandish elements you can find on The Divine Punishment: The choirs, the acoustic guitars, the over-the-top synths and samples, the fascinating mix of dying guitar leads and unhuman drumming. There is even a beautiful violin on “Guardians Of The Liminal” that takes my breath away. All these things and so much more add to what is an incredibly rich yet confusing album. Some people will surely avoid it like the plague, as all the adjectives I’ve used so far could be taken under a favorable or unfavorable light depending on who is listening. But if you are like me, you will become fascinated and try to digest and dissect every aspect of this maniacal album.

This is the sound of galaxies collapsing. This is the perversion and transgression of all things. This is divine punishment.