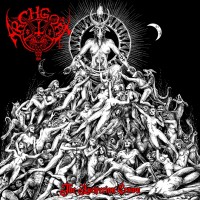 
Archgoat are a band that emerged through the Finnish black metal scene during the early 90s, alongside bands such as Beherit and Impaled Nazarene. Although Archgoat actually formed in 1989; amazingly, The Luciferian Crown was only the fourth full-length album that Archgoat released in the three decades of their existence.

Archgoat have a relatively tiny discography. Despite this, their music has remained consistent throughout, and the style and focus of their music has never strayed away from their original sound, and this album is no exception. The production and sound of this album may sound all too similar to their previous albums; the style and songwriting being far from original, meaning this is by no means a classic. That's not to say it's all bad. Per usual, the riffs contain great hooks, with a great balance of mid-to-slow-pace tempos with sudden bursts of high tempo sections.

The style of growling from Lord Angelslayer's harsh vocals are beyond the normal brutality of any typical black metal vocals. They sound almost death metal, so along with the fast pace rhythm sections and deep guitar tone, there are clearly death metal influences in here, which again is a continuation from previous albums.

There is nothing spectacular here, but it is good standard black metal. On the grand scale of things, The Luciferian Crown is a little less predictable than previous albums, with the use of more rhythm changes, although the sound, and Luciferian themes are pretty much the same.