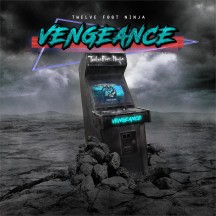 I just finished my third listen of Vengeance. Why that third listen? Well, I did my first two spins of this album about two weeks ago, and it was a very strange experience. So strange that I kind of wanted to give it some time before giving it a final spin. A final spin to form a definitive opinion on it. Coincidentally I also think it will be the final spin of this record in general.

I know that I sound like a Negative Nancy here. Truth be told, I can easily see others liking this album a lot. It certainly sounds unique, that’s for sure. Is it the kind of unique you are looking for? I hope this review will help you find that out.

This record starts relatively straightforward and traditional with its opening track. A bit of djent mixed with some synth/electronic vibes. A very solid opener in my book. After that, we start running into the odd stuff. Things like a strange vocal intro, an 8-bit video game intro, a cheesy musical sounding section and a section that sounds like a Mexican party is going on… Suffice to say, that Vengeance has its fair share of recognizable moments.

And that’s honestly one of its strengths (and weaknesses). It does manage to keep your attention throughout its whole running time. However, I also feel like these elements can sound a little gimmicky. Unlike an album that has an insane concept story or consistently uses certain unique instruments/sounds, this one doesn’t do that. Every song is unique, however it all sounds quite disjointed. I can appreciate the attempt, but a bit more cohesion would have done wonders. Some strong glue to put everything together. The more direct djent parts with the raw vocals are present in the songs, but for me that glue isn’t strong enough to hold it all together.

Performances wise, I can’t really complain. Good guitar, bass, and drum work coupled with vocals that offer variety. The vocals offer that variety with switching between harsh and soft vocals, but also the delivery in those two styles gets mixed up every once in a while. Very nice.

Production wise, Vengeance does deliver a good experience. It’s the type of production you would expect from a djent style album. Modern and very clean execution.

Scoring this album was interesting to say the least. You know, normally if I give a score like this to an album, I would suggest other options to check out. I can’t do that here, to be honest. More often than not a score like this for a first experience of the band, would result in very little interest in checking out their future work. But that’s not the case here either. In fact, I’m fairly sure I will listen to their next release. To see what unique stuff they can come up with and if they succeed in gluing it together a bit better. As for this record, I’m glad I listened to it, but after that third listen I don’t think I will be listening to it again any time soon. If you are looking for something strangely unique, by all means this is a very solid option.