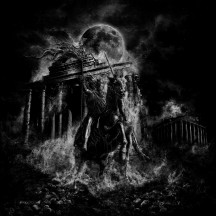 
Most of extreme metal is against Christianity's vast influence and its political power. But there was a time when it was the Christians suffering the persecutions. So, there's bound to be some extreme metal about that.

The Roman Empire has a pretty dark history. Unfit emperors. Massacres. Authority. Slavery. Persecution. Corruption. The Roman Empire fell and "the West" still hasn't gotten over it. Autokrator tap into that darkness with their music, both of the Roman Empire and our selective memory of it. So quite like an extreme metal version of Ex Deo, but much darker. I've actually been a fan of Autokrator for a long time, ever since I heard their self-titled debut back in 2015. But back then, it wasn't really the Roman themes that won me over. It was the fact that it was an experience I could only define as "tectonic".

Autokrator completely pummeled me. It was a death metal album so dense it turned into drone, creating a suffocating and massive sound. Even if this made the songwriting stand out less, it created a sound that felt unique and imposing. And since they've developed a habit of keeping their albums brief, I never minded. When Hammer Of The Heretics came around, it left behind most of the drone compression and revealed the songwriting under the cloak, which was mostly a very crushing death metal album. So that pummeled me too. Persecution feels weird. It's the first time I'm very confused about the production choices.

The vocals are cool, but the way they're mixed in here above anything else makes it feel like a reverse Autokrator. Instead of droning riffs feeling like a massive apocalyptic earthquake engulfing everything, the vocals feel a head above everything else, and quite as if some sound function that wrapped the instrumentals didn't affect the vocals. It's distracting to say the least, which is a shame, because what I hear from the instrumentals is, forgive me for overusing the word, "crushing". There's still a very massive sense of dreadful apocalypticism in it that isn't properly channeled. The right mix of obscurity and distortion, but it still feels off.

It's far from a disaster, since this mostly affects the vocals, and I probably would not have minded it that much if not for my personal history with Autokrator. So I'm probably making to big of a deal out of it. I feel like Persecution has an even better sense of flow and dynamics than its predecessors. And even if the last track is quite pointless, even as an outro, the overall experience is one of an immense display of force. Just one that leaves me a bit frustrated for it's botched atmospherics.

Written on 11.11.2021 by
RaduP
Doesn't matter that much to me if you agree with me, as long as you checked the album out.
More reviews by RaduP ››