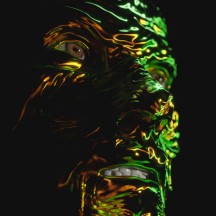 No, it turns out, this is a different French dude’s manic explorations (although Creature (FRA) did actually release an album last year as well). It’s probably not a surprise to know that Creature (FRA) are from France, not only because I’m forced to write ‘FRA’ every time I link to their profile, or because the album and song titles are in French, but the country’s got a strong track record for experimentation in metal. Eloge De l’Ombre comes courtesy of Raphaël Fournier, with this his fourth record under the Creature (FRA) moniker, and it represents the vision of a musician with an impressive grasp on how to incorporate an array of metal and non-metal styles into a single album whilst managing to keep it feeling enjoyably cohesive.

Eloge De l’Ombre is an album in the vein of the likes of Thy Catafalque and Solefald, where most of the review ends up just trying to cover all the different musical bases touched during its runtime. The album’s first few songs are mostly comprised of extreme metal, although the fusion of electronics and death/black metal on opener “Venin” makes it immediately clear that said extreme metal won’t be conventional, regardless of which form it takes. The deep, reverbing growling style used by Fournier on these early songs gives a booming, cavernous feel to tracks that otherwise are a bit more melodic and soaring, particularly when the acoustic guitars, electronics and synths come into play. “Noire” feels more reliably bright thanks to the brash synths and clean vocals employed on the track, taking proceedings in more of a symphonic black direction.

These first few songs are scattered and eclectic, with “L’Empire Des Singes” shooting in Arcturus-esque, brooding death and chaotic blasting directions all at the same time in its final couple of minutes. Arcturus, and more specifically The Sham Mirrors era Arcturus, was a band that came to mind during my first couple of listens to Eloge De l’Ombre, partly due to the synth sounds that permeate the atmosphere of a lot of the record, but also that ‘unpredictable but not messy’ avant-garde songwriting approach that the Norwegians were so good at. However, it’s after “Maussade”, a rather doomy piece, where the diversity really comes to the fore.

“Alternative” is an eerie softer song, with keyboards and electronics dominating the soundscape, even in the occasional metal moments. “Les Fragments” largely does away with metal altogether; this song, along with the title track, is a dark hip-hop piece. The former does eventually go into more of a prog-metal direction as it progresses, but both are dominated by dark, semi-industrial electronic soundscapes above which Fournier delivers quite convincing rapping (for some reason, I find rapping more enjoyable in French than English, go figure). The title track is flanked by another soft-ish track (featuring I believe hammered dulcimer) in the form of “Pas Le Même” and a last burst of extreme Arcturus-style music on Rétrograde”.

As you can tell, there’s quite a bit of musical range on Eloge De l’Ombre. Still, partly because of that Sham Mirrors vibe that lingers over a lot of the album, it all feels relatively natural, which is also helped by extreme metal making up the majority of the content here, even if that metal is vibrant and at times eclectic. Still, Eloge De l’Ombre isn’t enjoyable because it’s avant-garde (or at least, not just because it’s avant-garde), but because it’s entertaining, gripping and creates a gripping atmosphere. It’s a really fun album, not quite at the level of Thy Catafalque at their best, but it should appeal to those that have enjoyed Thy Catafalque, Solefald or Arcturus in the past.