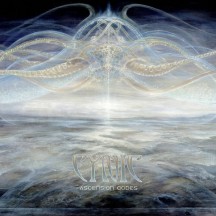 
The fact that this album even exists after the 2020 that Cynic had is remarkable.

A lot of important figures in the metal scene have passed away since the start of the Covid-19 pandemic, but few bands have been so affected by the hand of death as the Florida prog-death visionaries Cynic; in less than 12 months, both founding member and ex-drummer Sean Reinert and long-time bassist Sean Malone left this world behind. Although Reinert had left the project in 2017, the loss of both Seans in a year must’ve been incredibly painful for surviving founder Paul Masvidal; however, he persevered with the group’s fourth full-length record with replacement drummer Matt Lynch, and, although the future of Cynic is unclear, that artistic vision has been brought to fruition on Ascension Codes.

Although Masvidal had a drummer in the form of Lynch, the question arose of how to replace the bass virtuoso Malone, to which the solution evidently was: don’t. Instead, Cynic recruited British keyboardist Dave Mackay to, in addition to keyboard responsibilities, fill the void left by the bass with bass synthesizer. The outcome of this is unique, if nothing else. The bass synth lines sound very much like one would expect the bass on a Cynic record to sound, with the exception that they are not played by a bass; whilst it does the job and I understand why the approach was taken considering the circumstances, it’s not one that I would like to hear become more commonplace in prog-metal.

Outside of the (lack of) bass, what can listeners expect from Ascension Codes? Well, this album is very easily recognizable as a Cynic record, and not just because of the abundant use of vocoder on Masvidal’s vocals. This is not really a continuation of the direction they went with Kindly Bent To Free Us, however; there’s quite a few sections on the album that remind me of the riffing on Traced In Air, and even moments that harken back to Focus, albeit without the death metal moments from their 90s days. On a semi-regular basis, jagged prog/jazz-fusion metal riffs enter the fray, such as the one that opens “Elements And Their Inhabitants” or those found in “6th Dimensional Archetype” and “Architects Of Consciousness”.

On top of this, there’s all the mindblowing jazzy technicality one would expect from the band; Lynch’s drumming is frenetic and free-flowing throughout, and Masvidal remains hugely impressive in how he integrates riffs, leads and soundscape working alongside one another within these eclectic musical mixtures. Outside of the metal side, there’s also some electronica (smartly integrated into the likes of “Mythical Serpents”) and ambience, the latter particularly in the brief (~30-second) interludes scattered throughout the album.

At the same time, a lot of Ascension Codes is filled with shimmering soundscapes and vocoder vocals surrounding that jazz-metal fusion. It replicates the ethereal nature of the album art, but it’s definitely not going to be for everyone, and that won’t be helped by the production, which replicates that usual Cynic tone, for better or worse. Personally, I do rather enjoy Ascension Codes, with the likes of “Mythical Serpents”, “Architects Of Consciousness” and “In A Multiverse Where Atoms Sing” standing out, or at least sections within these songs. However, as much as I find the otherworldly aura and dizzying musicianship very easy to appreciate, it is a record where I find myself lost on occasion; tracks can be disjointed, the vocals can become grating, and sometimes the whole ethereal aura doesn’t have the strength in the accompanying instrumentation to sustain it.

Still, Ascension Codes is a commendable effort from Masvidal and company in the wake of such tragedy, and despite its idiosyncrasies and flaws, there is no one that really sounds like Cynic. This album takes a lot of the unique elements and oddities that made Cynic such a distinctive act and amplifies them, so I don’t see this album doing anything to convert those previously unsold on the band, or at least their post-millennium material. However, whilst I don’t think it competes with the quality of Traced In Air, it should be similarly appealing to fans of that record.

Written on 30.11.2021 by
musclassia
Hey chief let's talk why not
More reviews by musclassia ››