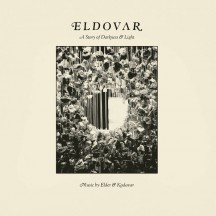 Not only did Weedpecker return with their first album in nearly 4 years and King Buffalo release their second album of the year, but Elder and Kadavar joined forces for a new collaboration album, Eldovar - A Story Of Darkness And Light. Nick DiSalvo has been a busy boy recently; not only is it just over 18 months since Elder released Omens, which itself swiftly followed The Gold And Silver Sessions, but DiSalvo also released Hirschbrunnen, the debut of his Delving side-project, earlier in 2021. On Kadavar’s end, this is their third album in three years, so Eldovar generally represents the latest efforts of a collection of industrious musicians.

I’m very familiar with Elder by now; this is the third album of theirs that I’ve reviewed for the site. In contrast, I had never heard of Kadavar before this collaboration was announced. A quick visit to their 2019 album For The Dead Travel Fast indicated that they a rather retro-sounding version of 70s-inspired rock with some 90s desert rock thrown in. It was intriguing to think where the midpoint between this and Elder’s long-form heavy psychedelic jamming would be, but the outcome was rather surprising. It doesn’t seem so on opener “From Deep Within”, which clearly bears the prints of Elder in its sprawling journey, with plenty of Omens’ jam-like development and psychedelic sheen, in addition to some heavier riffs and hazy mellow moments that run close to some of Weedpecker’s material. However, “From Deep Within” is the only song on Eldovar that feels this close to Elder’s individual work.

I mentioned in the previous paragraph that Kadavar evidently take influence from 70s rock based on the songs of theirs that I’ve heard; what I was expecting less was “In The Way”, an acoustic cut that makes me think more of 60s flower power, or perhaps some acoustic tracks from early prog rock records. While DiSalvo took on vocal duties on “From Deep Within”, Kadavar’s Christoph Lindemann takes over on “In The Way”; this trade in vocals initially makes one wonder how collaborative this record will feel, or if it will feel more like a split, with each band’s vocalist singing the songs in line with their material. However, “In The Way” does eventually move into a more driving rock jam, getting heavier as it goes on and reminding listeners that Elder are also involved.

“El Matador” follows in a similar vein to “In The Way”'s earlier parts, whereas “Raspletin” is a psych-rock instrumental most probably driven by Elder. The song where the collaboration feels most extensive is probably “Blood Moon Night”, the longest song on the album. At times it sounds like what I expected from Kadavar based on From The Dead Travel Fast, at other times it’s closer to 70s prog or even Pink Floyd (you can’t not hear “Shine On You Crazy Diamond” in the background during certain moments in this song); other times still there’s sounds leaning toward’s Elder’s more metallic past, although arguably more reminiscent of a group like New Keepers Of The Water Towers rather than any specific Elder song.

Having loved both Omens and Hirschbrunnen, I’ve been eagerly anticipating this latest effort from them, but ultimately I must confess I’m not loving Eldovar, and after a bit of pondering I think I might know why. Although Elder clearly appreciate and derive influence from older prog/psychedelic rock music, their own output feels a lot more modern. In contrast, Kadavar, based on my limited exposure to them, are very content to sound at times as if they actually came from that time period. Personally, whilst I enjoy a fair amount of music from the 70s or inspired by that period, I struggle to be enthusiastic about modern music that sounds like it came from the 70s, whether it’s this or Canterbury nostalgia such as Needlepoint, unless it's done exceptionally well (e.g. Zopp), which isn't quite the case here. Obviously this is a collaboration, so you’re going to get a mix of both artists, but outside of “From Deep Within”, there’s not enough Elder magic and a bit too much Kadavar on Eldovar for my tastes, so ultimately, it’s not doing as much for me as I hoped it would.

A bit too twee and, with mainly shorter songs, lacking the long-form exploration that makes Elder’s music generally so compelling, Eldovar - A Story Of Darkness And Light is an album that should work nicely for those that appreciate some nostalgia and daintiness in their psychedelic rock. For those, like myself, hoping for something a bit more epic and engrossing based on Elder’s track record, you’ll likely find the album enjoyable in passing, but outside of “From Deep Within”, may only truly engage with the record in fits and starts.