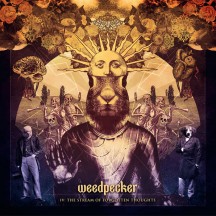 Not only did Elder and Kadavar join forces for a new collaboration album and King Buffalo release their second album of the year, but Weedpecker released their first new album in nearly four years. Of the three albums, IV: The Stream Of Forgotten Thoughts was arguably the greatest unknown entity, even more so than the collaboration album. That’s not just because of the relatively long gap between releases, but because the band is for the most part a completely different one to the group that released III at the beginning of 2018. 2019 saw the departure of every member apart from Piotr “Wyro” Dobry, including his brother Bartek. The other two members of the band had only joined the previous year, so evidently there was some longstanding friction within the band prior to 2019, but whatever the circumstances were, the end result is that IV: The Stream Of Forgotten Thoughts is the first chance to listen to this revamped version of Weedpecker.

Now, it’s not a guarantee (Motörhead went through their share of members apart from Lemmy and stayed much the same stylistically), but generally big changes like this come with notable changes in sound. The previous iteration of Weedpecker was already on a trajectory away from languid stoner metal and towards a more psychedelic rock sound on III, but the nature and extent of that shift has been amplified on this new album. The mellow psychedelic rock on III had a clear Pink Floyd influence, but the driving snare and guitar chugs on “No Heartbeat Collective” veer away from that ethereal mellowness towards a more desert rock-heavy spin on psychedelic rock. There’s a fair amount of layering and retro-sounding mysticism on the song, but it’s a very different take on psychedelic rock to that found on III, let alone the albums before.

I’ll be honest, this opening song sent alarm bells ringing for me; it’s not as if the approach on that song was necessarily bad, but it was lacking that signature laidback Weedpecker charm that elevated them above bands that employed a more generic psych-rock style such as is found on “No Heartbeat Collective”, and without that charm, the whole purpose of Weedpecker is rather lost for me. Thankfully, it has not completely disappeared; “Fire Far Away” is more in the expected vein, with guitar work that scratches the same itch that III did, while “The Stream Of Forgotten Thoughts” has some of the languid grunginess of their earlier albums.

Still, whilst IV: The Stream Of Forgotten Thoughts is still recognizably Weedpecker, I do find some of the songs to lack a bit of the appeal that pretty much everything on their first three albums had; both of the songs mentioned above would have fitted on prior records, but probably been my least preferred tracks if they had been featured on them. Add to that more music in the vein of “No Heartbeat Collective”, such as “Big Brain Monsters” with its Jimi Hendrix riffs and brash soloing, and my impressions of this album thus far are of a band that is less unique than before, and not quite able yet of reliably delivering what made them so compelling prior to the line-up revamp.

On the flip side, even sub-optimal Weedpecker makes for very pleasant listening, and there are moments on the album where they did capture the magic of Weedpecker on song, including the soothing instrumental “The Trip Treatment” and sections scattered throughout the closing trio of songs. Based off of IV: The Stream Of Forgotten Thoughts, I suspect that Bartek may have played a significant role in what drew me so strongly to Weedpecker, but Wyro was clearly central to their past work and that does carry over onto this new album, just not as regularly as I would like.

Weedpecker’s fourth album suggests that the project will remain relevant for years to come, in spite of the extensive changes. However, as someone who held the previous version of the band up with the likes of Elder as one of the leading lights in heavy stoner/psychedelic music at present, IV: The Stream Of Forgotten Thoughts does move Weedpecker 2.0 down a couple of levels in my personal hierarchy, at least for now.