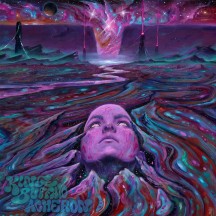 Not only did Elder and Kadavar join forces for a new collaboration album and Weedpecker return with their first new album in nearly four years, but King Buffalo released their second album of 2021. Now, that makes 2021 sound like a very busy year for King Buffalo, but it’s actually less than what was initially planned, with the band announcing in March that they would release three albums in 2021. Ultimately, one of those has been moved to next year, which is probably sensible, but they’ve still put out more music in 2021 than most projects, and what’s more, both records are actually pretty great.

I already covered The Burden Of Restlessness back in June, and admired King Buffalo’s approach on the record compared with the previous year’s Dead Star, but Acheron is, if anything, a step up from The Burden Of Restlessness. The first thing that distinguishes the two albums is the song composition, which is evident when one checks the track lengths; whilst The Burden was comprised of short-to-mid-length songs, every track on Acheron is around the 10-minute mark.

Now, when a band like King Buffalo loads a record with 10-minute songs, one expects them to either be prog adventures that jump over the place, or more gradual atmospheric journeys. Ultimately, the music on Acheron is closer to the latter; the opening title track swims by in a gentle groove, floating along for several minutes before sliding into nice stoner fuzziness. “Acheron” is a very fluid song, ebbing and flowing between calmer delicacy and noisier riffs in what is arguably a post-rock manner. It’s not something I’m too accustomed to hearing from King Buffalo; most of their recent songs have been a bit too short to play with dynamics in this way, and the very lengthy “Red Star” from Dead Star was more of a prog odyssey. Still, I really enjoy the way they employ this approach on Acheron.

The long-form, jam-like fluid composition that gradually transitions from soft to heavy (or vice versa) is the template for most of the album’s songs; obviously, the way in which things are arranged has some variety, but “Zephyr” and “Shadows” are songs that undergo subtle development across their lengthy runtimes. However, this is by no means a bad thing; each song is deftly crafted to keep the listener engaged through each transition and new idea. The subtle clean guitar leads early in “Shadows” and the keyboard solo later on, the sinister vocals from Sean McVay in the heavier parts of “Cerberus”, the bluesy guitar solos in “Zephyr”: each song has several excellent moments.

Another thing I really enjoy about Acheron is the tone that they’ve taken here. I was introduced to King Buffalo with Longing To Be The Mountain, and was really taken by its mellow, gentle vibes; as much as I’ve voiced mixed opinions about the ‘flower power’ retro-psychedelia in my review of the Elder/Kadavar collaboration, King Buffalo took that sensibility but placed it within a modern and alluring context on Longing To Be The Mountain. I’ve missed some of that tranquility on the two albums that followed it, but whilst Acheron doesn’t reach the same extent, it gets close to that vibe and balances that mellowness with the heaviness that permeates this record. Everything about this album, from the tone and the structure to the actual specifics of the compositions, works really nicely for me.

To be honest, going into last Friday, I did not expect Acheron to be my favourite of the trio; I’ve been a big fan of both Weedpecker and Elder for approaching a decade now, whilst King Buffalo are both a more recent and less world-changing discovery. However, whilst I’ve got gripes with both of those groups' latest efforts, I find Acheron to be a incredibly relistenable album, one that finds a perfect balance between heavy rock/metal and soft contemplation across a quartet of serene musical vistas.