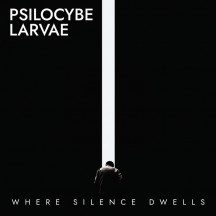 
There’s been worse ways to celebrate a 25th anniversary than releasing an album like Where Silence Dwells.

It’s interesting how completely disconnected bands can have coincidential release patterns. Back in the autumn of 2019, there was a period in which numerous prog bands ended prolonged periods of inactivity by releasing their first full-length albums since 2006. Now, in the same year that the melodeath band Destinity dropped their first new album in 9 years, Psilocybe Larvae release their first record since 2012. Psilocybe Larvae aren’t entirely melodeath; they were described as ‘dark metal’ in a review of their previous record, The Labyrinth Of Penumbra, and that vague classification is still somewhat applicable here, but Where Silence Dwells, released 25 years after the formation of this Russian group, does simultaneously feel closer to and further from melodeath than its predecessor.

That review of The Labyrinth Of Penumbra mentioned that Psilocybe Larvae’s mix of prog-tinged melodeath-doom separated them from the likes of In Mourning, and when listening to that record I’m inclined to agree; in contrast, I feel like In Mourning is a very natural reference point for quite a few songs on Where Silence Falls, particularly towards the back end of the record. I don’t know how factual it is to discuss what influence either band may have had over the other, since Psilocybe Larvae are actually older than In Mourning, but the latter are more renowned, and there are moments when I find myself for a moment thinking that I’m listening to the sequel to Garden Of Storms, before I remember that I’ve already reviewed The Bleeding Veil.

At the same time, there is a gothic edge to several tracks earlier on the record (such as “The Flame Of Dying Life” and “Inner Darkness”), as well as a doominess that calls to mind the likes of Ghost Brigade. The accumulation of the progressive, doomy, gothic and melodeath influences does result in a sound that (In Mourning aside) stands relatively distinct from any particular scene or influence. Additionally, these elements are implemented effectively, resulting in a collection of well-crafted and reliably enjoyable tracks. Some of my highlights on the record include the aforementioned gothic-tinged “The Flame Of Dying Life”, the acoustic guitar-heavy “Run To Nowhere” and the multi-faceted and memorably melodic “The Fall Of Icarus”. I also enjoy the occasional incorporation of string instruments (cello, viola) on “Ghost In The Room” and “Sorvali Cemetery”.

There’s not much in the way of negatives to find with the album; some of the clean vocals (for example, the chorus of “Ghost In The Room”) feel slightly undercooked compared with the other vocals on the album, but that’s about the only thing that stood out to me in a less positive manner. Outside of that, the main issue for me is the aforementioned similarity to some of In Mourning’s work, and how I don’t think the songs here quite reach the same level that the Swedish band manage. Nevertheless, Where Silence Dwells is a very enjoyable and easily replayable record, and one that shows that Psilocybe Larvae remain a relevant entity despite a prolonged period of line-up changes and inactivity.

Written on 10.12.2021 by
musclassia
Hey chief let's talk why not
More reviews by musclassia ››