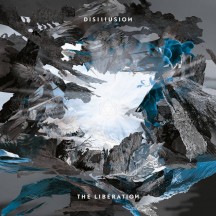 
Pfft, Disillusion are such amateurs. They couldn't even make it a full 13 years without releasing a new album.

Right on the tail of Tool releasing Fear Inoculum after a lengthy hiatus, another prog metal band has returned; The Liberation is Disillusion's first full-length album since Gloria dropped in October 2006, although that gap was briefly punctuated by the single Alea in 2016. Unlike Tool, however, who had at least shown a gradual progression of their sound over their previous efforts, it was hard to know what to expect from Disillusion, whose only two albums prior to The Liberation varied drastically in sound. Would the band replicate the style of either of these two releases, develop a mix of them both or deliver something new entirely? Having now listened to the album a few times, I would say The Liberation leans more towards the musical approach displayed on Disillusion's debut, whilst at the same time entering new territory for the band.

2004's Back To The Times Of Splendour, something of a cult classic in extreme prog circles, was an exhilarating mix of melodic death metal and progressive songwriting, with long twisting songs packed with effective hooks and rich atmosphere. The Liberation broadly drinks from the same well (rather than the more experimental Gloria), with melodeath sections countered by proggy/folky sections within consummately crafted songs, whether 6 minutes or twice that length. However, there are some clear differences. Amongst the many high points of BTTTOS were the powerful and enthusiastic clean vocals, which have always come across to me as eerily reminiscent of Serj Tankian from System Of A Down. The same vocalist is present on the new album (founder, multi-instrumentalist and only constant member Andy Schmidt); however, this time round, the clean vocal sections make me think more of Nordic folk/prog metal bands. For examples of this, see the chorus of "The Great Unknown" or the clean sections of "A Shimmer In The Dark Sea". This feels like a conscious decision, based on the more prominent overall inclusion of Nordic metal elements, as well as the (I think) snowswept landscape portrayed in the frankly awful album artwork. Bands I've seen mentioned as comparisons for the new album include Wilderun, Insomnium and Barren Earth, whereas acts such as Borknagar came to mind personally.

The whole album is diverse, infectious and compelling, but the two songs that really stand out to me are "Wintertide" and "The Mountain". "Wintertide", the opening full track and single, acts as a singular demonstration of the new-look Disillusion sound right off the bat, effectively employing an array of melodic approaches throughout a diverse yet circular song, including delicate acoustic guitars, epic clean vocal choruses, melodeath riffing, luscious soloing, and patient development of motifs, particularly during a 3-minute section midway through the song. Despite the number of changes in approach throughout the song, each transitions feels natural, and as such the 12 minutes fly by. On the flip side, "The Mountain", again 12 minutes in length, appears to be a somewhat divisive song based on comments I've read. The first half, if anything, possesses a slight Vulture Industries/Arcturus feel. This then gives way to a trumpet(?) section that evokes The Gathering's "Heroes For Ghosts", and a varied second half occasionally punctuated by rich clean vocals that really embody that epic Nordic vibe I mentioned earlier. "The Mountain" is new territory for a band with a history of reinvention, and a delightful ending to a surprisingly excellent comeback.

When a band releases two wildly different albums in 3 years and then disappears for over a decade, it's hard to know what to expect of their comeback. Just something good and interesting would have sufficed; instead, Disillusion have reworked their sound, and in doing so released one of the highlights of 2019 so far.

Written on 08.09.2019 by
musclassia
Hey chief let's talk why not
More reviews by musclassia ››