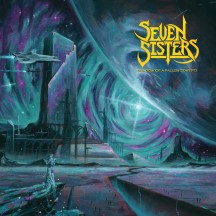 
Confidently living in the shadow of the previous records.

You know, in a lot of ways, this record has a lot of the same qualities as the other Seven Sisters albums. Unfortunately, it misses a certain spark that the two previous records did offer.

The production quality of Shadow Of A Fallen Star Pt. 1 is very similar to what we got with The Cauldron And The Cross: very classic sounding without falling into the trap of creating a sound that feels unbalanced. Every instrument is woven really well into the mix.

Looking at the songwriting, I kind of miss the high energy of the previous record. Don’t get me wrong, there’s still some good pace and flow on Shadow Of A Fallen Star Pt. 1, but the songs on this record don’t jump into overdrive like some tracks on The Cauldron And The Cross. As a result, a track like “Wounds Of Design” suffers a bit from this. It basically is the “Oathbreaker” from Shadow Of A Fallen Star Pt. 1: the song that serves as a bit of a breather between the faster and heavier stuff. While that worked beautifully on The Cauldron And The Cross, on this album it feels a bit unnecessary; I would consider it pretty much as a filler piece.

The whole record might not be as memorable as the other 2 Seven Sisters albums, but there are still some good bangers on here. The title track is exquisite, and songs like “Whispers In The Dark” and “Horizon’s Eye” absolutely hit the mark. The album intro is not that necessary in my opinion, and “The Artifice” (just like the previously mentioned “Wounds Of Design”) doesn’t really do it for me.

As far as the performances go, this is top-notch. Nice riff-work, driving bass and punchy drums give this album a robust and distinct vibe. The vocals deserve a special mention here; Kyle McNeill seems to have approached them a bit differently on Shadow Of A Fallen Star Pt. 1. The result is a bit more variety in them, something which I can very much appreciate.

So where does that leave us? Well, I didn’t find this record as compelling as I was hoping for. But to be fair to Seven Sisters, they did set the bar pretty high with the previous album. And truth be told, I still like this record more than a lot of the other acts that aim for that classic style of heavy metal. The simple reason for this is that Seven Sisters has a very distinct sound to them, and while the intensity isn’t as high as the previous album, the identity of Seven Sisters can still be found here. For me, it remains a relatively easy album to recommend. It’s good. This one might not be the brightest star of their discography, but it's still one that shines and stands out between many of the other acts in this subgenre.