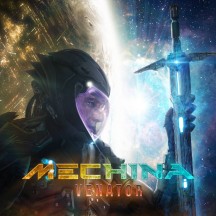 
Another 1 January, another Mechina album.

With the exception of 2012 and an unusually quiet period between 2018 and 2020, every year since 2011 has seen the release of a new Mechina record on New Year’s Day. To begin with, the band’s progressive, symphonic cyber-metal sound was embraced, particularly with Empyrean and more so Xenon; the churning, industrial death-tinged riffs, dramatic synths, effects-laden vocals and meandering song structures culminated in a distinctive and exciting blend. However, even back in 2015 with the release of Acheron, concerns were voiced about the formula growing old if steps weren’t taken to notably mix things up, and those issues have persisted to the present day, particularly due to the prolific nature of Mechina’s output. With Venator, the story is much the same.

I reviewed Siege last year, and at the time, I acknowledged that on the surface, Mechina could still sound exciting; if Siege was your first exposure to Mechina or you are a diehard lover of their style, I would imagine it would make for rewarding listening. For everyone in between, however, I could see the persistently intense tone, overlong songs, repetitive nature of the songs and singing, and lack of hooks quickly leading to diminishing returns across the whole album, or with repeated listens. Part of the issue was down to the vocals; with Mel Rose becoming a permanent member of the band and David Holch’s vocals becoming both almost entirely clean and highly digitally modified, there was a lack of diversity in the vocals across the record that really detracted from the full-album experience. Individual snippets of their duets would sound stirringly passionate, but with a very narrow emotional intensity and tonal range across the album, I found the appeal to be unfortunately fleeting, and the excessive effects to be grating.

I’m saying all this about Siege to highlight ways in which I do consider Venator to be an improvement. The album is very stylistically similar to Siege, which already felt like a somewhat reductive and condensed interpretation of what Mechina had been building in the 2010s. However, it does introduce variety where it was lacking in its predecessor; while Siege only featured extreme vocals courtesy of a cameo by Anna Hel on the title track, Venator sees Holch bringing back his own harsh vocals, and in the process adding some variety to “The Embers Of Old Earth”, where otherwise harmonized clean digi-vocals reign supreme.

Venator does also manage to deliver a few memorable moments; for me, the choruses of the title track and "When Virtue Meets Steel" have nice vocal hooks, and the keys on “Praise Hydrus” are a nice, if perhaps too brief, feature. Additionally, the album benefits greatly from having notably shorter (over a minute on average) than Siege, as well as including some variation in intensity courtesy of “Sacrifice Zone” and “Totemic”, on which the guitars take a back seat, and Holch and Rose opt for a more restrained approach.

Because of these things, I would say that Venator is a step up from Siege. At the same time, it’s not a record that will bring me back to it once this review is written; it’s more memorable than some of their more recent albums, but there’s no songs here that inspire revisits in the way that the best post-Xenon songs (such as “On The Wings Of Nefeli”, “The Halcyon Purge”, “Cryoshock” and “Progenitor”) do, let alone the highlights of Xenon. The range in tone on the album is welcomed, but “Sacrifice Zone” and “Totemic” aren’t particularly impactful, and with the possible exception of “Venator”, the heavier songs blend together with their many previous songs in the same vein. I think it’s going to be difficult for Mechina to change that until they prioritize incorporating more memorable instrumental hooks to avoid the industrial chugs and symphonics blending into an amorphous euphoric mesh, or otherwise mixing up the vocals more, at least by at times removing the heavy vocal effects and perhaps expanding the pitch range.

Still, much of this has already been said enough times by now, so by this point I imagine Mechina are writing primarily for those fans that have decided they don’t need too many changes to the formula. For those fans, Venator is more than good enough; for everyone else, this album isn’t going to win you (back) over.

Written on 04.01.2022 by
musclassia
Hey chief let's talk why not
More reviews by musclassia ››