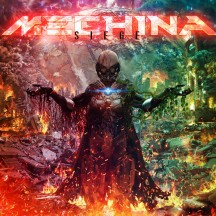 
After a 4-year break, the New Year's Day tradition of a Mechina album has returned, with all the pros and cons that come with it.

Across a 5-year period, cyber-metal group Mechina greeted the arrived of a new year with a full-length record, from 2013's Empyrean to 2017's As Embers Turn To Dust. Back when I hadn't yet earned my stripes, I covered a couple of these records as a guest reviewer, and whilst I've always generally enjoyed Mechina's blend of industrial metal, djent, hints of extreme metal and electronic effects (both in the music and as a vocal manipulation), I started to get a feeling of diminishing returns as each new album came and not much had changed bar the decreasing memorability of the new record. As such, the break between As Embers Turn To Dust and Telesterion felt like a good idea, and I was quite intrigued to see what they would come out with for their first release of the new decade. As it turns out, however, it's a bit of a case of 'new year, same story' with Siege.

All the ingredients one would expect from the band based on records such as Acheron and Progenitor are here in abundance: the ultra-low, gnarly guitar chugs along with the flashy electronics that gives the whole music a sci-fi vibe, which is amplified by the effects applied to the clean vocals. Probably the most notable thing here is just how prominent those clean vocals are, particularly those of Mel Rose; once a guest brought in to elevate a couple of tracks per record, she is now a permanent member of the band and a persistent feature on Siege. Add in David Holch pretty much abandoning growls and the vast majority of the vocals on the record are of the clean variety (I believe the harsh vocals on the title track come courtesy of Anna Hel of Conflict). Given that the clean vocal-heavy tracks on previous albums, particularly those featuring Rose (the likes of "On The Wings Of Nefeli" and "Cryoshock"), are among my favourite songs from the band, this sounds like it should be an ideal move for me, right? Right?

I've seen some strongly negative opinions about Siege shared in the album thread on Metal Storm; I certainly don't feel as negatively about the record as some of my fellow users, but I definitely understand the source of their criticism. Siege is an album that suffers from a lack of emotional variance; the clean vocals always feel intensely emotionally charged, whether due to the delivery or the effects applied to them, and paired with the hefty instrumental base, almost the whole album feels like it's constantly about to explode from sheer passion. When you consider that the album is over an hour long and features multiple tracks that flirt with or exceed the 10-minute mark, it's simply too much. Any individual track on the album sounds pretty enjoyable on the whole, but particularly given that the vocal melodies aren't hugely memorable and there's a lack of the instrumental hooks that have elevated songs such as "Zoticus" in the past, it all starts to blend together long before the album is together.

There are tracks that stand out, with "Purity Storm" being one that reliably piqued my interest during playthroughs. However, the fact that "Siege", both one of the shorter songs here and the only one with a consistent harsh vocal presence, is one of the other clear highlights suggests that variety might have helped the record that bears its name. Whether this would come from mixing up the vocal styles, limiting the song lengths a tad, or just having a wider emotional palette is open for debate, but the combination of the full-on tone and the lack of hooks to inject some memorability into tracks (which are particularly needed from the electronics, as the guitars often form an indistinguishable chug muffled by the vocals and other instruments) does somewhat hinder the album. There are portions on closing song "Freedom Foregone" that do feature slightly clearer guitars and more ear-catching electronic bits, and they do lift up the song, even if not throughout.

The last couple of paragraphs sound pretty negative, but this isn't intended to be a bashing. I don't dislike Siege by any means; as background music, the relative uniformity, forceful instrumentation and emotional intensity fill the void quite excitingly. However, it's an album that struggles to fully stand up under tighter scrutiny, and as a result it doesn't manage to bring about a triumphant return to the days of Xenon as far as 1st January celebrations are concerned. If you've never heard Mechina before, I wouldn't be surprised if you found this to be an exhilarating discovery, but based on comments I've seen elsewhere, it does seem that fans were hoping they would have pushed onto something slightly greater than this by now.

Written on 02.02.2021 by
musclassia
Hey chief let's talk why not
More reviews by musclassia ››