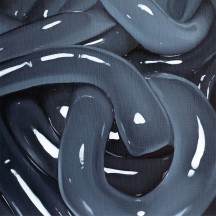 
The previous Boris album was called "No". This one is called "W". The next one might be called "".

Boris is probably one of the most beloved drone bands out there, and by drone I mean, post-rock, experimental rock, shoegaze, sludge metal, noise, noise rock, post-metal, stoner metal, psychedelic rock, dream pop, and, since very recently, hardcore punk. Having been formed 30 years ago and releasing [I don't wanna count, but a lot] records spanning various genres, including a bunch of collaborations with Merzbow, one pretty recently. Generally a very good time, time in which one wonders what else could Boris possibly offer. Indeed, the decade between Absolutego and Altar was trailblazing, especially because all of their massive albums are from then, but there's a shitload of Boris albums from that period that just faded away. And a lot of the stuff released since then didn't really have the longevity of some of their best work. It was No that really reinvigorated my interest in Boris as a band that might not have released all of their masterpieces just yet.

The most prevalent feeling that I get while listening to W is bewilderment. This is the same band that dropped No? Sure, this is precisely Boris' trick, still constantly extending the range of their catalog. I could be wrong in assuming that no other Boris album sounds like this, because there's too many of them. But I'm constantly bewildered not because of what Boris has done up until now, but because the music itself doesn't make any sense. Sure, the prospect of a Boris album so experimental and deconstructed that they shock me is promising, I feel like the experience of actually listening to the album isn't the right kind of bewilderment. It's not the curious type, but the type where you feel the band digging themselves deeper and deeper into meandering abstraction.

W is an album I should love in theory. I could describe it like a Cocteau Twins album deconstructed into drone. Wata's sweet whispered vocals lead the most dream pop of its moments, and they sound genuinely good. But the way the album approaches textures and pacing feels almost like it's trying to be as antithetical to the listener as possible. It's dreamlike, but in a way that you're not buying into it. It's not unpleasantly dreamlike in the nightmarish sense, but at best it's the part of the dream right when your alarm rings. The multiple sudden stops somehow get to happen right during the album's best moments. The album moves from more experimental shoegaze sounds to some sludgy moments, the latter of which feel like a breath of fresh air, not because of their quality necessarily, but because their relative straight-forwardness is a pretty good resting place for a listening experience that's more like sitting through something.

W is basically a bunch of vignettes that feel directionless and unpolished. There was definitely a way to make this work, the whole pushing dissonance into serenity. At the same time, something tells me that this not working is somehow intentional. Like it's general unpleasantness doesn't come from a place of mishandling sounds, but an experiment is just how subtly malevolent they can be as music makers. In the grand scheme of Boris, each record will eventually fade. Some sooner than others. I already don't remember much about it, other than that I don't wanna listen to it again.

Written on 26.01.2022 by
RaduP
Doesn't matter that much to me if you agree with me, as long as you checked the album out.
More reviews by RaduP ››