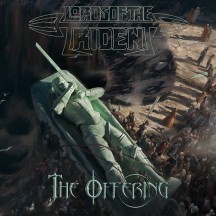 
Lords Of The Trident? I don’t care much for House Tully, but I do quite like this album.

I’ve covered a fairly broad spectrum of metal genres while reviewing for the site, sometimes seemingly to the surprise of others; although I certainly have my favourite genres, I manage to find music I enjoy in most categories. Some, however, are admittedly underrepresented in my review catalogue; for starters, retro-sounding thrash metal and hard rock are generally dead ends for me. I would also consider classic/traditional heavy metal to be one such style, as outside of Amorphis(-adjacent) music, I normally don’t have any inclination towards the nominees in the heavy/melodic metal category each year. Still, there are occasional exceptions, one of which is Lords Of The Trident; I can think of more natural fits on the writing team for The Offering, but I will nevertheless try to score an away goal in the ball game.

Despite the name, it doesn’t seem immediately clear to me whether there is any intentional relation of this band with the A Song Of Ice And Fire series; however, I did find my mind going to Seven Kingdoms on my first playthrough of The Offering (it appears that the two groups are friendly with one another). This is because Lords Of The Trident approach heavy metal from something of a US power metal perspective, at least in portions of the album. It’s not a persistent feature of the album, as much of it operates in a more mid-tempo range, including opening track “Legend” and its nifty central Medieval-style lead guitar hook, but the likes of “Charlatan” and “These Tower Walls” bring some pace to the table.

Now, what is it about The Offering that caught my attention? More than anything, it just does the important things right. Although it’s not inundated with power metal’s pace throughout, there’s that fantastical power metal aura, not only to the story but also to the tone of the record, which, when combined with the strong lead vocals, gives the record a brightness, melody and emotion (and cheesiness, but in a good way) that renders it more to my taste than bands more in the trad heavy/NWOBHM mould. If I would compare it to any one album, it would be Firewind’s The Premonition, a longstanding favourite of mine in this sphere of metal that rides the line between heavy metal and power metal very successfully. Add on top of everything I’ve already mentioned some quality shredding lead guitar work, such as the solos in “Acolytes” and “These Tower Walls”, and this is an entertaining and exciting record.

On top of Firewind and Seven Kingdoms, there’s other bands that I found myself thinking of when listening to The Offering. First off, there’s a bit of a Blind Guardian vibe to moments in “Feed The Wolves”, with the harmonized ‘woah’s in the energetic chorus and the solo. Additionally, the riff work in “Carry The Weight” could easily have featured on some of Killswitch Engage’s songs, while the harpsichord in the interlude “The Invitation” harkens to Stratovarius’s “Black Diamond”; this interlude leads nicely into “Dance Of Control”. All the tracks I’ve mentioned so far are among the highlights of The Offering; I would also add the evocative “Offering To The Void” to the list of standout songs, and to a lesser degree the slower, more expansive closer “Heart Of Ashes”, which has a hint of Serenity to it.

Now, when talking about US power metal, one band that’s hard to overlook is Iced Earth, and “Champion”, coming just before “The Invitation”, feels a bit like a Stu Block-era Iced Earth-lite track; add in some triplet gallops and I could have easily believed it to be a cut track from Dystopia. However, I think it would have been a cut track due to its quality, which is a bit below par compared with the rest of The Offering. Clocking in at a round hour in length, this is a lengthy record, and for me, “Champion” and “The Blade” are obvious candidates for the chopping block in order to make the album a more concise and consistently satisfying album.

Still, while there’s moments of slack across the runtime, Lords Of The Trident’s latest album is a very decent example of modern heavy metal, with memorable hooks, particularly on the part of the vocals, as well as strong guitar work and entertaining songs. Those with an affinity for more conventional and melodic metal should find a fair amount to enjoy on The Offering.

Written on 03.04.2022 by
musclassia
Hey chief let's talk why not
More reviews by musclassia ››