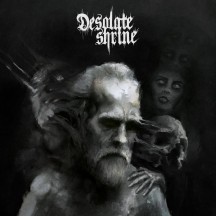 There are few countries that have explored their penchant for cavernous death metal to the extent that Finland has, and one of the biggest names in the past decade have been Desolate Shrine. I discovered them through 2015's The Heart Of The Netherworld back when I still hadn't encountered this specific brand of death metal, and that also lead me to discover their 2012 masterpiece The Sanctum Of Human Darkness. It's pretty mind boggling realizing that that was seven years ago, and in the meantime only one other Desolate Shrine album was released. I even reviewed two different Convocation (other band of the mainman) albums since. So, needless to say, expectations were pretty high.

A lot has changed in those seven years. I discovered a lot more death metal. I went through a bunch of different phases where it was either most of what I listened to or I suffered immense fatigue. I'm still at a weird point in my relationship with death metal, but a new Desolate Shrine ought to be enough to get me out of my mojo. Well, out of all similar bands, they've been most effective at it. A few listens in, I can already say that I enjoy Fires Of The Dying World more than 2017's Deliverance From The Godless Void (which might also explain why I didn't even mention it so far). Part of what makes Desolate Shrine so interesting is that it's a trio where one dude does all the instruments (LL, also of Convocation), while the other two (MT, also of Urn and Sargeist, and RS also of Lie In Ruins and Sargeist) only have vocal duties (don't worry, I can't tell them apart either), even though they've both been drummers in a bunch of other bands. But when LL is such a great drummer himself, I guess it's much easier to have two vocalists than three drummers.

What feels most impactful about Desolate Shrine's music is that it manages to find a balance between different directions, as in it is cavernous without being completely claustrophobic, doomy without being doom, blackened without being black, as well as having some technical bits and a fairly strong hook selection. Now more than ever, it seems like Desolate Shrine are interested in writing groovy riffs, at least as groovy as they can be for a cavernous death metal band. That comes at the expense of some of the suffocating atmosphere I've come to expect from Desolate Shrine, but what ends up happening is that Deliverance From The Godless Void ended up more engaging and dynamic than I thought it would be.

My hope now lies in Desolate Shrine being more timely with their upcoming record, and hopefully an even stronger balance between groove and atmosphere might be achieved.

Written on 04.04.2022 by
RaduP
Doesn't matter that much to me if you agree with me, as long as you checked the album out.
More reviews by RaduP ››