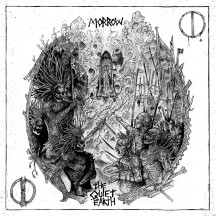 
Tracing hardcore's evolution, at some point emotional hardcore emerged, into what became colloquially known as "emo". But even then, I don't think anyone was anticipated how crust punk's marriage with metal will bring some of the most potent emotional impact in hardcore.

Hardcore punk is the genre I've seen most often interwoven with metal. Grindcore, metalcore, screamo, powerviolence, emoviolence, deathcore, mathcore, post-hardcore, all of these share a vitriolic heavy energy in the music making despite genre lines pulling them closer to either metal or punk. Then comes crust punk, which isn't directly traced as "hardcore", and even still has the old "punk" in the name, but anyone can attest that it has its closeness to metal and hardcore. We feature Amebix on here, and you'll find varying degrees of crust in acts like Alpinist, Oathbreaker, Wormrot, Martyrdöd, Dödsrit, Downfall Of Gaia. But honestly, the thought of crust punk and metal brings forth but one name in my mind: Fall Of Efrafa. Alex CF, their vocalist, has been pretty busy since the band's demise in 2009, fronting acts like Light Bearer, Archivist, Anopheli, and finally Morrow.

I've known of Anopheli and Morrow before finding out about their connection to Fall Of Efrafa, so I was always surprised how these crust acts would pop up and just really hit it as far as this almost symphonic take on the genre goes. Now it makes more sense, especially considering how integral a part of this sound Alex CF's vocals are. I'd argue that they're the most emotionally impactful part of his music, though that would be underselling how perfectly the rest of the music acts as a barge for this hopeful despair. That's not to mention the myriad of other people who have contributed with vocals to The Quiet Earth, the full list available on Bandcamp, but highlights include Anna of Archivist, Carl of His Hero Is Gone, James of Autarch, and Alex's mom, Elizabeth. And with the trademark sound of multiple shouted vocals over hardcore and strings already in place, it wouldn't be far-fetched to say that this might be the best case of it.

And of course, I doubt The Quiet Earth would be this impactful without it's expansive use of strings, and the ebb and flow that moves from morose to mellow to fiery in a way that constantly builds and sustains a dynamic soundscape. And considering how long it's been since the last Morrow album, and how this one ties thematically to the narrative of previous Morrow and Anopheli records, it does feel like a pretty worthy closer to the "Norr saga". It is a bit daunting to think of The Quiet Earth as "a final album", and maybe that's more in the sense that Alex will continue with some other project, and if that's the case, this trilogy of records is pretty untouchable. I know I've been using "emotional" a lot in this review, and there's no way to justify it without listening to the record. The greatest strength of the music is not the arrangements or the vocal performance or its creativeness, but in how all these elements work together for a common goal: making the listener feel the story.

Sure, Morrow's circular cover arts never betrayed the journey that would happen inside them, even if they clearly expressed that the album is about something, some story to follow. But now more than ever, this feels like a story to be told.

Written on 07.04.2022 by
RaduP
Doesn't matter that much to me if you agree with me, as long as you checked the album out.
More reviews by RaduP ››