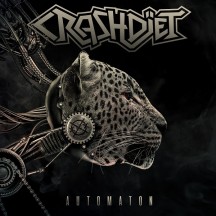 The world may be screwed, but hey, let's party right? Glam metallers Crashdïet crash into 2022 with their sixth album of modern glam metal, showing to the world that no matter how bad things may be, there is always room for over-the-top pop metal. Automaton may not be a landmark record in the band’s discography nor in the genre as a whole, but it will provide listeners a good dose of fun and moments that will have you wailing along to the music while the world burns outside your window.

The band’s second album with Keyes, Crashdïet ensure his presence is used to maintain that extra edge he gives the music; his rough-edged voice contrasts with the rest of the band, the light/dark dynamic on the anthemic chorus of “Together Whatever” being a solid example of where this works best. Keyes borrows from Mr. Big’s Eric Martin in his approach, particularly on tracks like “Dead Crusade”, delivering his lines in his swinging and rolling way, fitting the song like a hand in a (fingerless) glove.

Like most glam albums, the album has a shiny and smoothed-out sound; what it lacks in grit and power, it makes up for in bombast when the moment calls for it. With all bar the bass sounding clean and audible, the tracks are presented in the best way possible and as a result none of the shortcomings have any technical issues to hide behind.

Where the band excel is when they deliver upbeat, anthemic moments that can take a song to the next level, or, at the very least, provide an otherwise forgettable song with a moment to remember, with “Powerline” falling into the former while “We Die Hard” falls into the latter. The main problem with Automaton is that, ultimately, it features too few great songs and too many ok songs to really elevate itself beyond being a good, occasional listen. With that said, “Unbroken” and “Shine On” do stand out from the rest of the album and get your blood pumping with their pomp and swing, while other tracks such as “Resurrection Of The Damned” and “Together Whatever” fall not far behind, providing highlights that will likely catch the ear of listeners and would be solid additions to any modern glam metal playlist.

Of course, no glam record would be complete without the obligatory power ballad; filling this unwritten rule here is “Darker Minds”. Unfortunately, like many before, it is a track that is so formulaic and banal that is rendered skippable after hearing it once or twice. “Shellshock” also falls into the same category of being skippable; while it does feel like a palette cleanser in the way it takes a different approach to the rest of the album, beyond the good solo, it doesn’t leave a big impression in and of itself. Rather, it stands out simply because it's different to the rest of the album, than due to any kind of quality it has.

Crashdïet may not be reinventing the glam genre, but they ensure that the glam flag still flies when many of the previous flagbearers have long packed it in, or become a pastiche of what they used to be. Automaton is a good album with moments that will have you singing along.