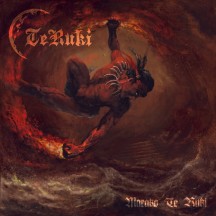 
I have reviewed music from a lot of places, but... French Polynesia?

French Polynesia, home to such fascinating archipelago names as Society Islands and Disappointment Islands, are also home to a few metal bands. Though out of the three bands currently listed on Metal-Archives, only one is still active. Though I am generally a bit skeptical of bands from such unexpected countries in fear of running into a Ghost Bath situation, as in a band from the first world pretending to be from someplace exotic for attention. And to be fair, the main reason why I'm giving Te Ruki attention is because of their country of origin, so it does work. However few bands are as convincing in their authenticity as Te Ruki, from the lack of anonymity that usually accompanies such acts, to the lengths the band goes to to include their heritage.

For starters, the band sings in Tuamotuan, a dying language whose speakers number in the thousands, so I can absolutely admire the preservation effort that this album also acts as in addition to being a music album. It makes perfect sense that this album was made with support from the French Polynesian Government. The specific phonetic and cadence of the language certainly adds a flair to the vocal performance of the album, something that, in my limited knowledge of Pacific linguistics, mostly reminds me of Māori. Thus, just like the cover art, merely listening to the vocals evokes images of wild oceans and angry tattooed warriors. I refrain from using the term "exotic" because of its orientalist leanings, but a lot of what makes Marako Te Ruki unique is precisely that, the novel feeling of metal being used to preserve Pacific culture.

Tuamotuan aside, Marako Te Ruki is mostly a symphonic black metal album, whose instrumentation mostly sticks to the standard, bar a few flute and percussion moments. For a band from French Polynesia, the sound quality is pretty up to standard, and I've heard many bands with budgets potentially bigger sounding worse. So kudos to the studio in Tahiti where they recorded this (and to the studio in France where it was mixed and mastered). Of course, the synth sounds especially sound cheap, so they're the ones that betray the band's low budget most. But then again, that is pretty much in true black metal fashion. Instead of making it sound underworked, it adds some extra authenticity and kvltness. Complete that with the fact that the songwriting and performances never disappoint, and you have an album that would've been an interesting listen even without the novelty of its origin.

That's it. Now I want every culture to make at least one banging black metal album.

Written on 02.05.2022 by
RaduP
Doesn't matter that much to me if you agree with me, as long as you checked the album out.
More reviews by RaduP ››