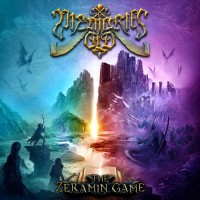 
So here I am reviewing an album almost two years old. Reading comments, I see how little appreciation there is for this album. While it's clear not quite everyone will love this album, it's got a lot of good stuff, whether it's your style or not.

So. Memories of Old with their debut album The Zeramin Game. I'll start off by saying how this album ticks all the boxes for me: Proggy moments, backing symphonies, narrative concept about kingdoms and a mysterious island, with everything in between, from pirates to fancy flying dinosaurs called Lokkens. The story basically follows two children on their journey to prove themselves. This album has two intros, the first acting as a spoken prologue, and the second as a musical overture to kick off the album. Apart from solos, the guitars take a back seat for most of this album, letting the symphonies and keyboard leads take over for the most part. Most of the song lengths vary from about 6 to 8 minutes, obviously baring the spoken interludes and the epic title track. The album's first full song is "The Land of Xia", which is your typical symphonic power metal track, but shows some truly amazing melodic moments, more so than many other albums I've listened to recently. "Some Day Soon" is a driving metal anthem, possibly showing sides of vocalist Tommy Johansson's other band, Sabaton. Other styles are present on this album, including the ballad "Destiny" with its 6/8 time and acoustic intro. The highlight of this album arrives in its climax, the title track, "The Zeramin Game". With its 14-minute length, this epic travels through its movements seamlessly, perfectly wrapping up the story. After its 2-and-a-half-minute intro, we're given its verse-chorus structure before we are graced with darker moments as the characters almost fail their quest, and uplifting moments when they are saved. The album is closed off perfectly with its outro track, ending with a long cymbal beat.

You'll all know vocalist Tommy Johansson, from Sabaton and Majestica. Johansson performs exceptionally well on this album, showing off his astonishing range and powerful vocal abilities. His voice perfectly suits the music, and due to the double intro of this album, it's a truly epic moment when his amazing voice comes into the music.

While this album won't appeal to all power metal fans, and while it's not free of cheese and cliches, it's overall amazing, and looking past these things, The Zeramin Game has earned a special place in my heart, one that has yet to be shaken by another album.