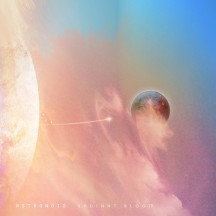 
There are few bands with discographies as lean as Astronoid, and yet with a mountain of expectations.

I first got into Astronoid through their 2016 debut album, Air, an album I still hold is a very high regard considering that it was as fresh then, when blackgaze was getting more and more saturated, as it is now. It found a mix of light and dark sounds that felt thoroughly unique to them, and they played it with such zeal that it was impossible not to feel at least a bit convinced by it. And even then, there were people disappointed by it compared to the band's previous EP material, which was even more black metal focused. So when the band's follow-up, a self-titled record of all things, came around it had the massive task of fully realizing their sound. And if you remember my review, it pretty much failed at that. Now that a follow-up to the follow-up is here, I was naturally hoping for some course correction.

For the most part, Radiant Bloom is a course correction. It is not on Air levels, nor does it try to sound exactly like it, but it reintroduces elements of what made it great into the fold while polishing the elements of the self-titled record. So, in a way Radiant Bloom ironically sounds like it bridges the gap between the two albums' sounds, while at the same time being more than just a weighted average of the two. Probably the most important element brought back from Air are the blast beats, whose contrast with the saccharine vocals was the biggest factor in my enjoyment of their music in the first place. And speaking of the vocals, for those who are unfamiliar with the band, they might take some getting used to, as they're an even more sugary version of clean vocals you would find in ethereal music.

Blast beats aren't present in any song, nor are they used to such a wide extent as on Air, whereas the more post-y/djenty chugs that were expanded on Astronoid also find plenty of a presence here, so there's always some contrast present between heavier and lighter elements. But at this point Astronoid can make that contrast feel so organic it doesn't even sound much like a contrast anymore. The shoegaze sounds even closer to dream pop this time around, with some of its moments barely anchored in heavy music. And songwriting-wise, there's plenty to appreciate in terms of vocal melodies and riffs, but I was most pleasantly surprised by some of the guitar solos.

Radiant Bloom still doesn't feel like what I hoped Astronoid would become when I first heard Air, but they're a lot closer than they were a couple of years ago, and I'm definitely more excited for their future now. The sky is the limit.

Written on 09.06.2022 by
RaduP
Doesn't matter that much to me if you agree with me, as long as you checked the album out.
More reviews by RaduP ››