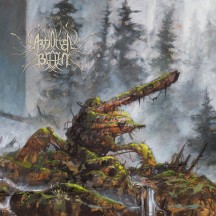 Despite their pretty short career, Artificial Brain has become quite a household name in death metal, living at the intersection between technical death metal, brutal death metal, dissodeath, and blackened death metal. Basically a lot of the more extreme forms of death metal, all found a very welcoming home in Artificial Brain's sound. And because of how long it's been since the band's last album, 2017's Infrared Horizon, I've been more used to using Artificial Brain as a frame of reference for everything Gorguts-core rather than actually interacting with their music. So now that there's a self-titled album, and their last with long-time vocalist Will Smith (who is probably tired of every review making jokes about his celebrity name sharer), I had to do some revisiting.

It's a bit ironic that today I also reviewed a new album from a band with an amazing debut and a slightly less appealing follow-up, with the new album sitting in between the two quality and sound-wise. Only this time, Artificial Brain are putting the self-titled last, and Infrared Horizon is less of a sophomore slump that Astronoid, but a similar trajectory nonetheless. The differences in sound between Labyrinth Constellation and Infrared Horizon are not immense, and some might find them barely noticeable, but one being more into tech death and the other more into blackened death leads to Artificial Brain bridging the small gap between the two.

Artificial Brain have had a habit of having a bunch of guest vocalists on their albums, from the omnipresent Paulo Paguntalan (of Encenathrakh), who also makes an appearance on the record. Other than Paulo, there's some pretty high-caliber ones in Nocturnus' Mike Browning and Gorguts' Luc Lemay, while producer Colin Marston also provides some warr guitar. The extra vocals do sprinkle some diversity alongside Will Smith's gurgled gutturals, but most of the album's diversity and dynamic range comes in the instrumental field, as the music flows through sections of intense brutality, swarms of intricacies, moments of atmospheric emphasis and melody, especially as the album closes into throbbing synths.

It would be easy to overwhelm using Artificial Brain's sound, and a lot of bands at this intersection go even further into sounding suffocating (see Encenathrakh), but moments like "Embalmed In Magma" show why pulling back at times can create such a great flow in the sound, and what could come out as chaotic, feels even more controlled as a result. The riffs, ever-changing as they are, still pack a punch and become more familiar with each listen, and the album leaving some room to breathe allows the bass to have a bit more of an upfront impact. The dynamic pace leaves some grind taste in the faster moments and a bit of doom in the slower, but subdued enough that it just adds a nice aftertaste.

And maybe this is what Artificial Brain's success formula is: standing at the intersection of death metal's most extreme subgenres, indulging in all of them but relying on dynamic and immersive songwriting rather than just using death metal's extremity to overwhelm. And with this formula, Artificial Brain succeeds.

Written on 09.06.2022 by
RaduP
Doesn't matter that much to me if you agree with me, as long as you checked the album out.
More reviews by RaduP ››