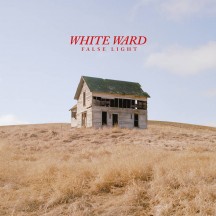 
As metal’s flirtations with the saxophone have intensified in the past decade or so, few bands have more effectively married the genre and the instrument than White Ward, and False Light is another true reflection of their talents.

Like many of their compatriots, Ukrainian post-black outfit White Ward are releasing their latest album in far more sombre circumstances than they would have expected when recording False Light in Kiev. After contemplating whether to even release during this time, they ultimately concluded that the capacity for music to inspire and heal meant sharing this record was the obvious move, with the hope that it too might provide light, true or false, to some people. Reviewing albums released under such circumstances does provide an extra challenge; an enhanced degree of sensitivity is warranted, particularly if one’s feelings towards the record veer towards the negative. Thankfully, there’s not really much scope to say anything negative about False Light, which is a triumphant success for White Ward.

White Ward already evolved quite significantly between the release of their first two albums, and those trends are extended further on False Light; the post-hardcore and electronics from Futility Report are firmly in the rear view mirror, and blackgaze remains an important part of the formula this time around. However, in terms of genre ratios, the post-black on False Light feels a bit closer to post-metal this time around; there are some big crushing lower-register sections to be encountered this time around. Additionally, while some of that blackgaze shimmer permeates the album, in general there’s an overarching darkness to False Light.

As alluded to in the introduction, White Ward uses saxophone, perhaps even more so than previously now that Dima Dudko is a core member of the band. Metal’s turbulent relationship with the saxophone has been a divisive one; there’s few instruments more prone to eliciting comments decrying its use on a record. On False Light, there is perhaps room to debate how much the instrument enhances the overall experience. Particularly in the more intense blackened blasting stretches, I do occasionally find myself wondering whether I’m actively enjoying its participation or just not harbouring negative feelings towards it. However, during the regular softer stretches across the record (whether in the form of detours midway through the long songs or as the dominant trait of the softer songs), it is given a more pivotal role, and takes these opportunities t shine with both hands.

However, the softer moments aren’t just for the sax. There’s three short tracks on False Light, and each takes a very different form. “Salt Paradise” is more gothic country than anything else; Crowhurst’s Jay Gambit’s deep croons add that Americana flair, as acoustic guitars, saxophone and trumpet (an occasional feature in the early songs on the album courtesy of guest Jerome Burns) flesh out the soundscape. “Echoes In Eternity” is sparser, the saxophone taking centre stage against a dark ambient backdrop, and the bleak closer “Downfall” is sparser still, a charged voice sample set against an ambient synth background. These three songs are placed at the start, middle and end of the record, providing respite or finality in the wake of the gargantuan beasts they line up against.

It is those gargantuan beasts, however, that are the main draw of False Light. The aptly-named 13-minute opener “Leviathan” shifts from slow, swollen menace to razor-sharp blasting, and while it does provide a moment to breathe after a few minutes of continual intensifying, this is but a brief calm before a second storm. Within these moments, not only the saxophone but the guitars also have moments where they take a leading role above the cutting blackened textures. In terms of show-stealing, however, the lead guitar’s main time to shine is a blistering solo near the end of “Silence Circles”, which comes as part of a surprisingly classic metal-inspired riff section in this song destined for some eager headbanging. There are occasional unexpected detours such as this peppered across False Light, even if most of the material does come in one of three forms (seedy lounge quiet sax moment, slower brooding post(-black) riff or high-octane blasting assault).

Still, although the album fluctuates between three states of being for the most part, the band’s adeptness in each state removes any concerns over this. This isn’t an album that grows tedious as it runs on; instead, the title track that dominates the closing third of False Light is one of its highlights. White Ward’s first two efforts were two very different approaches to making an album in terms of length and integration of ideas, and both had pros and cons that made them pretty much equivalent in quality, in my eyes. False Light, while it does, like Love Exchange Failure, lack some of the exuberance that made Futility Report such an exciting debut, nevertheless feels like an important maturation that solidifies White Ward as a leading light in the post-black scene.

Written on 16.06.2022 by
musclassia
Hey chief let's talk why not
More reviews by musclassia ››