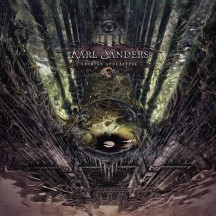 
First Meditation, then Exorcisms, and now, after long last, an Apocalypse: Karl Sanders’ Saurian series has escalated dramatically as time’s gone on.

Karl Sanders is known to most of the world as the guitarist, vocalist and founding member of American death metal band Nile, a group that have hardly hidden their infatuation with ancient Egyptian and Mesopotamian cultures. Sanders has even gone from playing in an Egyptian-themed death metal band to making guest contributions in actual Egyptian death metal bands, appearing on 2020 releases from both Scarab and Nader Sadek. However, long before this, Sanders dived deep into his fascinations in the form of his solo project, which effectively took the acoustic and atmospheric interludes from Nile’s early records and turned them into the core sound of full albums. This project lay dormant for a long time, but 13 years on from Saurian Exorcisms, Sanders the solo artist has returned.

Karl Sanders as a project started off pretty much as an ambient record, and it’s still a central component on Saurian Apocalypse. For the first couple of minutes, “The Sun Has Set On The Age Of Man” transports listeners to sandswept lands on a foundation of tribal percussion, atmospheric drones and flutes. However, there’s nothing ambient about the acoustic guitar shred solo from virtuoso Rusty Cooley that covers most of the second half of this track, and there’s more moments across the record that move away from ambience towards something more substantial. “The Evil Inherent To Us” in particular is hardly relaxation-worthy material, with returning session vocalist Mike Breazeale delivering some disconcerting interjections in this rather groovy cut; replace the acoustic guitars with distorted electrics and this would translate readily into an alt-metal effort (surprisingly, the rather aggressively titled “Skull Fuck Ritual (Skull Breach Edition)”, is far more contemplative and quieter in comparison). While the ambient vistas Sanders conjures across this album remain as compelling as they did on Saurian Meditations, it’s good to hear him dabbling with actual riffs and more energetic arrangements this time around.

Sanders has featured a range of Eastern instruments on his solo albums, and Saurian Apocalypse is no exception, with appearances from the baglama saz, sistrum, dumbek and glissentar, among others. Another instrument, the oud, is given a chance to shine on “An Altered Saurian Theta State”, with guest musician Mustafa Stefan Dill delivering an impressive solo; Dill isn’t the only guest on this track, as Nile’s George Kollias pops up to perform some drums. These drums are credited as acoustic jazz drums in the album blurb, but there’s definitely a heaviness to this section that makes it clear why Kollias was brought into the fold. Another instance in which hints of Sanders’ metal background seep through is an electric guitar solo in “Divergence: The Long Awaited Third Primordial”; on this occasion, the guitar isn’t shredding like Cooley did with his acoustic, but the exaggerated whammy of the elongated notes adds a sinister tone to what was already a subtly dark composition. The volume on Saurian Apocalypse reaches a peak midway through “No Creature More Deserving Of Cataclysmic Annihilation”, as a dramatic crescendo of strings and horns evoke a temporary sense of panic.

You may have noticed I’ve neglected to score this review; to be honest, I don’t have much frame of reference for rating an album such as this. What I can say is that, for the most part, I found Saurian Apocalypse to be a subtly captivating album; I especially enjoyed the dronier and more percussive sequences. Some of the more eclectic moments didn’t quite click for me, such as Cooley’s wild acoustic guitar solos, but these were a minority, and some of the diversity that Sanders brought into the fold this time around helps keep the record fresh for most of its runtime. Saurian Apocalypse further benefits from what is a pretty great production, something that's grown since the project’s initial records. Overall, I consider this to be a successful return from the Karl Sanders project; if nothing else, I’d probably be more inclined to listen to this again than most recent Nile albums.