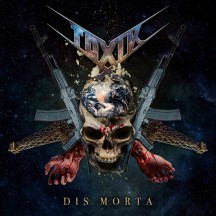 
In the last decade or so, it has been a great time to be a fan of thrash; not only has there been a bounty of new bands releasing seminal releases, but veterans of the scene have reformed or returned from a long hiatus away from the studio. While not one of the leading lights of the thrash scene in the 80's, Toxik were hardly also-rans, with two influential diamond-in-the-rough albums in World Circus and Think This to their name.

Returning to the studio for a full-length album after a 33-year absence, Toxik return to a world of metal that has seen their small scene of tech thrash (alongside the likes of Coroner and Mekong Delta) grow and flourish to a point where bands like Vektor and Revocation not only fly the flag for the OG crowd, but also cross-pollinate beyond the original thrash boundaries and spread as far afield as the likes of Meshuggah and Cynic.

So, the scene is well set for Toxik to, if not return to a hero's welcome with Dis Morta, at least get a warm reception as the album kicks off with... well, a head-scratching moment, to say the least, with the title track. "Feeding Frenzy", however, dives straight back into the turbo-charged insanity riffage Toxik became famous for, harking back to classic cuts like "Heart Attack" to the delight of fans of the band.

"The Radical" eases up on the insanity but retains the power and technical precision to keep the momentum rolling strong; "Hyper Reality" follows in the same vain, with DeMaria managing to steal the spotlight. The highlight is the expansive "Devil In The Mirror", a track that switches between gears with such smoothness that it shows the band needn't play at constant breakneck speeds to hold your attention. In contrast, "Power" does get overwhelming with the sheer amount of components flying around and a mix that pushes things right to the edge of the speaker, creating the kind of chaos that is hard to follow.

As with many a returning band, Toxik is no exception to the trend of only having one or two original members at the heart of the group; in this case, it is guitar supremo (check out "Chasing Mercury" to hear his credentials) Josh Christian who remains from the band's 80s heyday. Even with a near-total changing of the guard, Toxik manage to replicate their identity extremely well, sounding like the latest incarnation of the band rather than a faded pastiche of what once was. Vocalist Iglasias does a good job stepping into Sanders' shoes, while DeMaria owns the drum stool with each track being a drum, as well as guitar, masterclass.

The biggest issues with this album are... well, just a collection of small issues really. I almost feel like I should give Iglasias a pass on the vocal front, given he pulls double duty on guitar as well. While the man is versatile on the six-string, his overuse of his wails does grate after a while, particularly when you hear his range in the beginning of "Devil In The Mirror". Alongside the aforementioned Iglasias is DeMaria's snare tone, which does not fit the aesthetic of the album at all, the one constant that appears to be overlooked. Finally, while Kataklysm and Mortician make good use of spoken word intros, here, the transition between the spoken word intro and the subsequent song kicking in proper is so jarring that it feels ill-fitting and forced.

Thirty-three years is a long time between releases for sure (fans of the band could have listened to Think This over a million times in the interim; I tried doing the full math but got bored, sorry), but one that sees Toxik age like fine wine rather than... well, something toxic. Dis Morta is an exciting return and one that builds on the band's legend after all this time, rather than damaging it.

Written on 25.07.2022 by
omne metallum
Just because I don't care doesn't mean I'm not listening.
More reviews by omne metallum ››