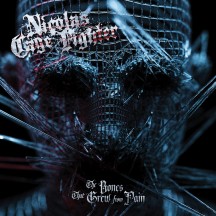 
A while after finishing my Nicolas Cage marathon in preparation for that one film in which Nicolas Cage plays a fictionalized version of himself, I find out that there's a hardcore band called Nicolas Cage Fighter releasing its debut full-length. This can't be a coincidence.

Nichlas Cage is quite a controversial actor. From his antics, incredible quality range, and some very reputably batshit crazy performances, it's not really a stretch to see why his name evokes a certain kind of vibe. I had obviously seen some of his films, aware of both the highs of Mandy and Wild At Heart and the lows of Ghost Rider and The Wicker Man. I mean, lows depending on who you ask, as the lows can sometimes be much more entertaining than the mids or even the highs. But it wasn't until the release of The Unbearable Weight Of Massive Talent that I took the task of actually seeing some of the man's classics like Vampire's Kiss, Con Air, Lord Of War, Bringing Out The Dead, or that one movie that actually won him an Oscar but nobody talks about it. I didn't watch every film that some might consider essential, nor most of the mid ones that permeate his filmography, but I have a pretty good grasp of "the highs".

So then I wrapped up that marathon with The Unbearable Weight Of Massive Talent and I have to say that it's quite an alright movie. Does the whole meta thing better than I expected it to and better than the Julia Roberts thing in Ocean's Twelve, even if it felt like a bunch of movies mashed together, and the bro movie between Nicolas Cage and Pedro Pascal's character was the most rewarding bit. Plus it reminded me that I really have to watch Paddington 2. Mostly, the movie tackled Cage's legacy, one that almost threatened to be turned into a joke by a lot of lackluster 2000s and 2010s movies, before a Cage-naissance of sorts with Mandy and Pig. So if someone wanted to make Nicolas Cage an emblem, now's probably a better time than 2012, when Nicolas Cage Fighter formed.

Using an actor as inspiration for a band mostly reminds me of the comedy act approach for the Schwarzenegger of Austrian Death Machine, but the difference is that Nicolas Cage Fighter take their music completely seriously. Is that a bit of a mood killer? I haven't detected any Nicolas Cage samples, nor anything in the lyrics does seem to indicate any references. So why am I reviewing this? First of all, I never misfiled anything. Second of all, there's only two reviewers I trust. One of them is me, and the other is not you. Third, I spent most of the review talking about Nicolas Cage, and almost none talking about the music. Well, it's pretty ballsy hardcore, not exactly very original but also not like the Bs of some other band. The production is good, the performances rip, the riffs are cool, and there's a bit of a black metal vibe in "Heretic's Vow" opening. If this ain't pit worthy music, I don't know what is.

Nicolas Cage Fighter don't seem to care that much about Nicolas Cage, but they care about hardcore. We don't get a lot of things to really care about.

Written on 02.08.2022 by
RaduP
Doesn't matter that much to me if you agree with me, as long as you checked the album out.
More reviews by RaduP ››