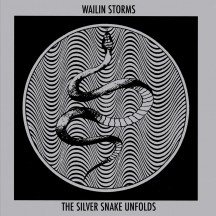 
01. In The Heart Of The Sea
02. Broken Into Three
03. Sunday Morning Cemetery
04. Drag
05. Who Took Our Drugs
06. The Silver Snake Unfolds And Swallows The Black Night Whole
07. Concrete Covers Dead Lovers
08. Carolina Moon


I hope you like some Southern gothic in your noise rock.

Trying to put a label on Wailin Storms' music is pretty difficult, especially when their band name already perfectly describes their sound. I could list a whole bunch of genres that go into their sound, and I probably will, but despite the multitude of sounds that shape it, Wailin Storms have never sounded disjointed, managing to shape their own recognizable sound over the course of the past decade. Their metal credentials might be a bit questionable, as metal is only a marginal undercurrent in their sound, but most of what they do threads so marginally to metal that it is appealing to it from multiple directions. I know that being upfront about a band not being metal when reviewing it on the main page of a metal website isn't the best move, which might explain why we covered their last in our nonmetal feature.

And yet, we have them featured on our website, and though they're far from the only non-metal band we have here, most of them are other projects of musicians already in some other metal bands. I'm not aware of Wailin Storms members playing in any other metal band, but with them being released through Gilead, there's always the possibility. I'm not entirely sure why Wailin Storms are here, but listening to them, it's hard to deny just how much the downtrodden somber darkness of their music is touching on similar grounds. They're a few steps removed from what Tribulation are currently doing, they're just missing the actual heavy metal element, and they're not that far off from something like The Gault or Reveal! or early Danzig.

What does go into Wailin Storms' sound is a lot of that Denver sound of gothic country, but merged with a deathrock branch of gothic rock, all applied to noise rock. Herein also come a bunch of punk blues and garage punk and post-hardcore and, yes, also doom metal. The actual amount of each of these genres is debatable, and I'm not here to apply some chemical tests to determine the amount of metal in The Silver Snake Unfolds. I wouldn't write a thesis on how it's actually the most metal of Wailin Storms' records, but something in my guts tells me that it is. I already mentioned the downtrodden atmosphere, but I can't stress how well the Denver sound, deathrock and noise rock all merge to create it, and at least half of that equation is the Glenn Danzig meets Jay Munly vocals of Justin Storms, and because of how a lot of The Silver Snake Unfolds relies on repeated lines, it's hard not to be impacted by Storms' dramatic vocals.

Somberness and darkness come from many places, from some familiar neighboring realms that might not be properly explored by us. Wailin Storms bring them closer.

Written on 04.08.2022 by
RaduP
Doesn't matter that much to me if you agree with me, as long as you checked the album out.
More reviews by RaduP ››