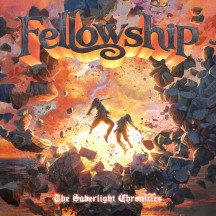 You know, a while ago I reviewed Victorius’s latest album, and I described it as an album that’s not for the lactose intolerant. Well, honestly, I expected to be saying the same thing about The Saberlight Chronicles after listening to “Until The Fires Die”. But, is this actually true for the whole record?

Firstly, let’s take a look at the lyrics, which are extremely deep and introspective. They talk about morality and the difficult choices one has to make on a daily basis in a world that likes to divide and put stigmas on a single individual. Nah... I’m just kidding, this is an absolute sugar overdose of fantasy fluff. It’s fun fantasy fluff, though; The Saberlight Chronicles is one of those extremely enjoyable records where you don’t think too much about the lyrics. They serve their purpose and are often used very effectively in catchy choruses. This whole album reminds me quite a bit of the type of work you see from bands like Majestica: very magical fairytale-esque in its vibe, which is something I do like to listen to from time to time.

I was surprised that The Saberlight Chronicles offered an impressive amount of variety. This isn’t the kind of album that sticks to one speed throughout its running time. Overall, it has a fast-paced and high-energy feel to it, but with enough “breathers” where they slow it down a bit. Whether it’s with a whole song like “Silhouette” or small sections into tracks like “The Saint Beyond The River” or “The Hours Of Wintertime”, these allow those high-energy moments to shine even more without feeling like a disruptive addition.

Production-wise Fellowship did a good job. Expect a very clean and stylized production, something we’ve all come to expect from most power metal records. I would give the drums a bit of extra bite in the mix; they tend to feel a bit pushed back in the mix. Additionally, the overall feel of the production could have a bit more character to it, so that it matches the character of the music even more.

And what about the performances? They’re top-notch. The vocals sound grand and fit perfectly with the type of aesthetic the band is going for. On top of that, there are some spectacular shredding parts and excellent solos from the guitar side of things. Both the drums and bass bolster the overall sound of this album.

So, overall, I think this is a very impressive debut, probably one of the power metal albums that I enjoyed the most (so far) this year. Is this something I’d listen to very regularly? No, but I say the same about records like those from Majestica. The type of albums that I have to be in a certain mood for to really appreciate. For power metal fans, this gets an easy recommendation from me. For non-power metal fans? I doubt that this record will change your mind about power metal. In fact, it will probably make you despise it even more, due to its heavy emphasis on a sugar-filled fantasy sound.