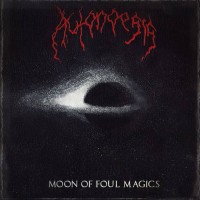 
The foulest magics of a sheltered moon. The blackening of an already intriguing mix of extreme genres. No frills underground riffing.

Autonoesis is something of a mystery, with its anonymous lineup (though my bet is still on it being a one-man band). Outside of its supposed Toronto, Canada localization (I say "supposed", but I'm not sure why anybody would willingly lie about being from Toronto), nothing else is known about Autonoesis, which is pretty weird to say about a band with an actual presence on a bunch of social media sites. The presence is still pretty lowkey, and so has the reception to their music been. Well, when this album was brought to our attention, most of us were pretty struck by its quality, and fluid mix of black, death, and thrash, hence why it landed a nomination for Best Thrash Metal album of the year in those 2020 awards. I'm not authorized to tell you how much of a hassle figuring out which category to nominate it in was, but I can tell you that Moon Of Foul Magics is already shaking that balance, so keeping that category is not guaranteed.

I did call Autonoesis a mix of extreme genres, but the truth is that the end result is still pretty far from the extreme end of the spectrum. Black, thrash, and death all still make the bulk of Moon Of Foul Magics, but thrash never was the most extreme of metal genres, and by black and death standards, Moon Of Foul Magics sits in the most melodic of territories. The vocals comfortably sit in blackened territories, with its enveloping howls feeling the closest to raw black metal that the music here does. The riffing does shift the balance a bit more towards black metal than 2020's Autonoesis did, with death metal proper feeling more like an afterthought now. And to be fair, instead of death metal proper always felt more like that melodic death/black mix that bands in the 90s pioneered.

Calling this Dissection-core isn't far off, but it's also pretty reductive. The sense of melody is clearly inherited from that lineage, especially in the more straight-forwardly heavy moments. But there are moments where even the melodic aspect itself pushes even further, often during its guitar solos or its acoustic sections. And that's not even mentioning how these structures often move into more progressive and technical territories, more of the former than the latter, and all seemingly applying themselves best on the thrash side of the mix. But really, did I mention just how amazing some of the guitar solos here are? I'd say half of what makes this such a thrilling listen lies just in how exciting it makes guitar solos sound. And that's considering that it is still mostly a black metal record this time around.

Production-wise, it still sounds a bit too much like a bedroom project. The rawness isn't really adding to the music's appeal the way that it potentially could, other than giving it the kind of amateuresque vibe that reeks of pure unadulterated passion. The drums suffer the most, though it's not something that really drags Moon Of Foul Magics down to much once you get used to the lo-fi sound. Thankfully, the guitars and vocals still manage to sound pretty ace within the less that ideal sound quality, and since so much of this album's excellent sense of ebb and flow relies upon them, it does seem like Autonoesis made the most of their resources.

Written on 02.09.2022 by
RaduP
Doesn't matter that much to me if you agree with me, as long as you checked the album out.
More reviews by RaduP ››