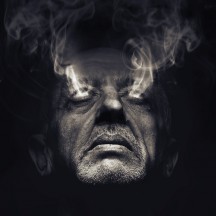 
Fellas, if your grandpa starts emitting smoke from his eyes, he might be turning into a great atmospheric-post-blackened-sludge record.

You might think the "atmospheric-post-blackened-sludge" tag is pretty ridiculous. It is. I don't make the rules. But I don't really have any better way to phrase the genre here. It's atmospheric sludge, but that is already one step removed from post-metal. It has a pretty significant black metal side, but I can't call it post-black metal because that's taken by a pretty different sound so it would be misleading. And, yeah, it is pretty atmospheric too. It is a pretty singular sound living at a very precise intersection of established genres. Not like it wasn't done before a million times by bands like Altar Of Plagues, Process Of Guilt, Downfall Of Gaia, Regarde Les Hommes Tomber, even countrymen like Entropia and Obscure Sphinx, though each of them play around with the amount that each genre has a share of. Though that's still a pretty nice FFO list.

That long list of blackened post-metal history does lead to Hegemone's take on it having some diminishing returns, and there's a chance that if it wasn't for the Max von Sydow lookalike on that fantastic cover, I would've let the album pass me by. However, I didn't, and I'm all the more pleased for it, because Voyance is a pretty neat record despite not tampering too much with genre norms. To start off with the bad news first: I think the vocals, great as they are, could use some more variation. As it is, diminishing returns in every similar scream, to the point where it can feel tedious. Still far from the worst example of monotonous vocals out there. That out of the way, the band does manage to include enough dynamics generally, even including some choir vocals to switch up the vocal field, in an effort to make the fifty minutes breeze by more interestingly.

As a result, this doesn't really feel like such a long album, even if the album is moving at pretty slow paces. But the variation it includes in its slowly developing sound and their amazing sense of flow does make Voyance fly by easier than anticipated. Becoming immersed in the bleak and desolate soundscapes comes quite naturally, and the touches of enveloping synths do give it a sense of grandiosity that takes things up a notch. With just enough melody in the riffs, at least by post-metal standards, a lot of it is still focused on a hefty amount of atmosphere building, while also being crushing and all that can be expected from this type of sound.

Overall, Voyance is reasonably effective in getting over the diminishing returns of its sound, and can prove still rewarding, but it's still something that keeps it from being in the league that really transcends that.