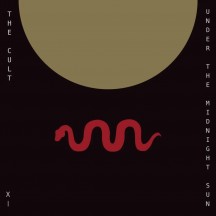 
After nearly 40 years, The Cult return to the studio where they recorded Dreamtime. Perhaps a more fitting image than the snake on the cover art would've been an ouroboros.

Under The Midnight Sun is not entirely a return to the sound of The Cult's debut from back in 1984, let alone to their The Southern Death Cult days. But for a career that lasted so long and managed both a consistency and an evolution in sound, this is the first time in a very long time where The Cult felt like they're specifically looking at those very early moody days. It's weird to imagine now how little common ground between the gothic post-punk and the hard rocking glam metal worlds there was before The Cult's Love came along, but that only makes Dreamtime more interesting in retrospect, a much more psychedelic and atmospheric album in comparison, barely sowing the seeds. Likewise Under The Midnight Sun finds The Cult at their most atmospheric in a long time.

I admit that I've mostly been into The Cult's hard rock days from between 1985 and 1991, which is also generally their most renowned period, and I've only recently gotten into their earlier stuff as well as the more alt focused sound of their latter albums. And yet, even with the shifts in sound, I can't say there's any of their albums I'd call a dud. Six years ago, alt rock flavors were still running thick on Hidden City, so it's a pretty weird place to find them shifted towards something closer to heartland rock or some more contemporary indie rock, a sound simultaneously atmospheric, epic, and grandiose, and yet still very understated. A lot of that is due to the very clear signs of ageing on Astbury's vocals, someone who should be in very high places among the best rock singers of all time, still retaining a very charming essence even with that tear.

The band manages to write something that's pretty opposite of the hard rocking ethos that usually comes to mind when thinking of hits like "She Sells Sanctuary" or "Wild Flower", even though there's still something very anthemic about the entire thing. Plus an emphasis on a nearly symphonic sound in the instrumentals brings a consistent charm to the melodies. It is a sound that would be in danger of being overstretched into unexcitement were it not for the very lean runtime, rounding pretty neatly at a 35 minutes, so this being the quality over quantity thing that it is, could probably prompt few to say that this is their best since whatever album they think was their last peak. I refrain from making such claims, I don't think this is close to The Cult's best, but there's still so much to enjoy from this sound.

Now I have to make sure I wouldn't lose all my goth credibility by accidentally mistaking them for The Cure at any point in the review.

Written on 17.10.2022 by
RaduP
Doesn't matter that much to me if you agree with me, as long as you checked the album out.
More reviews by RaduP ››