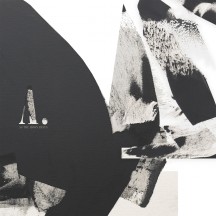 
We've covered all the previous A.A. Williams releases in our non-metal feature. There's nothing fundamentally different about As The Moon Rests that makes it a metal album to be reviewed on the main page, but something about it does make it more fitting.

As one of our fellow writers called it, Wolfecore is a particular brand of non-metal music, that would usually get the "singer/songwriter" label, but that very clearly does appeal to metalheads. Whether through some heavy post-rock, atmospheric sludge, industrial textures, loud synths. Aside from the obvious Chelsea Wolfe, there's also Emma Ruth Rundle, Esben And The Witch, Anna Von Hausswolff, and finally A.A. Williams. If you're starting to catch a gendered trend here, you're spot on. This is the female-fronted symphonic metal craze for the Roadburn crowd (hint: me).

While sometimes it does seem like the commonalities between them come more from how they appeal to the same crowd, there's still something in the fundamental common ground of heaviness being redefined through a more intimate singer/songwriter setting. A.A. Williams does have a bit of an advantage here, arriving a bit later onto this scene once its heaviness has already been cemented, thus the heavy post-rock of her collab with Mono or that one song from Forever Blue with Cult Of Luna's Johannes Persson already proved that she's capable of blending that heaviness within a more mellow and introspective style. Yet, despite their heaviness, those albums felt like albums that just flirted with metal.

Like I said, As The Moon Rests doesn't fundamentally alter that, but it's also an album where the post-metal aspect of it feels way more developed. I still wouldn't call it a post-metal album, nor would I want A.A. Williams to completely jump ship to the metal crowd, but the way that the distorted guitars enhance the soundscapes this time around feels that much fuller and organic. Whenever heaviness arrives, it's no longer a shock, it feels fully embraced. So even the more intimate stripped back moments like "Shallow Water" that have a lumbering distortion sleeping under them embrace it without nullifying its intimate feeling.

There's something that feels more expansive due to how naturally all the elements fit here. The orchestral instrumentation that would've felt more intuitive on the Mono collab is here. The heavy post-metal guitars of "Fearless", the stripped-back acoustic guitar of her self-titled debut, the desolation from the doomed cover versions from Songs From Isolation, all of them have a home on As The Moon Rests, and the way they manage to complement each other without cancelling each other makes the impact that much more breathtaking. Though there are moments where the extended runtime gives way to diminishing returns, As The Moon Rests manages to sustain its emotional engagement all throughout.