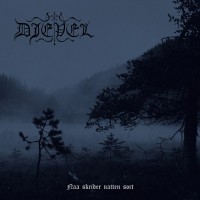 
Djevel are a Norwegian black metal project that have managed to retain an underground presence for quite some time now, and it saddens me when such bands go unheard of in the wide metal world for a particular length of time, especially when it comes to releasing top-quality black metal material such as this. So here's Djevel's eighth release, Naa Skrider Natten Sort, and well, what an album we truly have here!

Now in all seriousness, black metal doesn't really get much better than this. The songwriting is top-level stuff; it's right up there with the best in terms of modern black metal standards anyway. The thunderous sound from the blast beat drumming is exceptional, which is provided by no other than Emperor's legendary drummer, Faust. The vocal performance by Kvitrim is phenomenal, in which he gives off an evil presence, and sounds very much like that of Mgła's Mikołaj. Here we also have tremolo riffing at its very best, full of enchanting, hypnotising melody, with an incredibly sinister sound. However, the guitarwork isn't just about the tremolo riffing, as Ciekals' folkish acoustic guitar passages are also masterfully crafted. The lyrics are also stunningly written and poetic, bringing to life the old pagan traditions and folklore.

The atmosphere is captivating beyond belief; they create such vivid and imaginative soundscapes, which send the listener on an epic journey through Norway's breathtaking landscapes. You can actually visualise yourself in Norway's enchanting misty woodlands, or at times hiking along the many stunning rivers, lakes, and fjords, whilst looking up at the snow-capped mountain ranges. At times, it really makes you feel as if you're in another realm or at one with the beautiful Nordic nature. While speaking of atmosphere, l personally feel a strong connection with Vinterland here, particularly due to the chanting vocals (performed with utter perfection by Ciekals). These chants are used most effectively at the beginning of the track "Mitt Tempel Av Stierner Og Brennende Maaner", which, along with the wintery synths, play a major factor towards creating that incredible sound. However, the synths go beyond anything I've heard in recent years; they truly bring this album to life in ways you simply cannot imagine without listening first hand for yourself.

The build-up on the title track is an absolutely breathtaking example of this majestic wintery atmosphere, as the synths work incredibly well alongside the rolling thunderous blast beats and melodious hypnotic riffing, but each track has its own riff structure and separate atmosphere. Now I can't go without mentioning the bass work, which is truly remarkable, as you can hear the bass lines so clearly. This is actually unusual for this kind of black metal, as the bass is usually so far hidden back in the mix, or sometimes not even present at all.

This album sure as hell ticks all the right boxes for me; in fact, the only other band in black metal that has even come close to making me feel this exact same way is the mighty Mgła themselves, so believe me, Naa Skrider Natten Sort is one of those albums that doesn’t really come around too often.