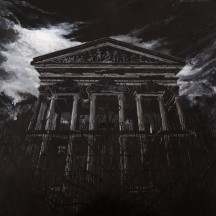 
This is what happened to Sin After Sin after a decade in Iceland.

Icelandic black metal dominated much of 2010s in terms of black metal. Even if some of the bands were active prior to the 2010s, bands like Svartidauði, Carpe Noctem, Wormlust, 〇, Sinmara all created a pretty incestuous scene with huge gaps between releases, plenty of disso-black Deathspell Omega influences, a lot of kvlt aesthetics. Some of those bands like Naðra, Almyrkvi, and Zhrine (and Wormlust if you don't count the Skáphe collab) still haven't released a second studio album. Misþyrming's debut arrived right in the middle of the decade, not later than most of the big names, but still early enough to capitalize on the wave. And, now in 2022, they're the only ones of the Icelandic bands I mentioned that have a third album.

There's a bit of a common thread in the album cycles of Icelandic black metal that I noticed in my review of the previous Misþyrming album, 2019's Algleymi, in which the more disso-black sounds of a debut would give way to something with more melodic focus on the follow-up. But now that this is the first time such a band is to release a third album, the rule for the third albums is yet unwritten. Still, that's more of a narrative that we like to think about Icelandic black metal and, in truth, it could spiral out into myriad of unruly directions. And Með Hamri does feel like more than just the middle ground between Söngvar Elds Og Óreiðu and Algleymi, as much as that's not entirely an invalid view on Með Hamri.

Með Hamri is more dissonant and vitriolic than Algleymi and more melodic and triumphant than Söngvar Elds Og Óreiðu, but there's something that makes Með Hamri feel alive in a very different way. I reckon at least part of it is due to new drummer Magnús Skúlason (previously of Svartidauði), who delivers some of the best drumming I've heard all year and carries the album to a sound that's as pummeling as it is dynamic. There's something about the organic and "live" way the album sounds which makes it sound pretty thrilling. From the speed metal-ish riffing of the opener, the two pairs of almost identically named tracks, up to the soaring and hypnotic closer, Með Hamri feels like a beast that Misþyrming is trying to tame. A beast of vitriolic violence and icy spewing rage.

I don't think that Misþyrming care that much about year-end lists, but they give us Með Hamri as another reason why other publications should really wait until the year ends before publishing their best of lists for that year.

This will be my last main page review for 2022. See you next year and Happy Holidays!

Written on 26.12.2022 by
RaduP
Doesn't matter that much to me if you agree with me, as long as you checked the album out.
More reviews by RaduP ››