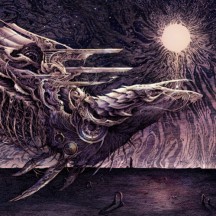 "I very much dislike this": that is the first thing that came to mind when listening to Overtaker. So, first impressions of this record were (to put it mildly) underwhelming... And as the review score shows, the subsequent listens didn’t really make me change my mind about this one. Actually, they kind of did. I dislike it slightly less now, I think. Whether that’s due to it actually needing a couple of spins to appreciate it or because my brain is attempting to suppress all the things that annoy me on this album, I’ll leave that in the middle. But it’s definitely the latter...

Ok, enough venting. What exactly didn’t I like about Hammers Of Misfortune’s latest album? After all, the performances are overall rock solid, and the production is good as well?

Unfortunately, that’s where the positives kind of end for me. This album suffers very much from what I described in the first sentence of this review. It’s full of chaotic energy; is that a bad thing? No, not necessarily if you can channel it into songs that have a certain aim/goal and have something specific to tell. Here, it goes all over the place, and I just can’t figure out what the idea was behind most of the songs on Overtaker.

Furthermore, there is another big issue with this album: it’s incredibly hard to sit through in one sitting. Not because it’s so dull you want to fall asleep. No, here the big problem is the flow, or more specifically, the lack thereof. It all feels so incredibly disjointed and schizophrenic.

And I know the issues that I’m bringing up are all related to the lack of a central idea or vision. I say central idea, because I feel like there are a lot of ideas here. But they are all like pasta thrown at a wall to see what sticks, and to my disappointment, it’s not a lot. There are good moments sprinkled throughout most of the songs, but their impact is so limited that none of the tracks really stand out.

Perhaps I’m missing something. Or is this the style of record I should expect from Hammers Of Misfortune? This is the first time I’ve listened to a Hammers Of Misfortune album, and I was genuinely excited for my first spin. I saw how their previous records got overall very positive ratings, hence why I jumped on the opportunity to review this one. Sadly, though, it didn’t really satisfy me. Like with a lot of albums that I give a lower rating, I can see potential. On a technical skill level, these guys are fantastic; I can’t emphasize that enough. However, the overall songwriting fell flat for me. Combine that with the pacing and flow issues, and the result is an album that I wouldn’t recommend to anyone. I can see the potential that the band has; I can’t see any potential in this specific album. It’s too disjointed and inconsistent for that.