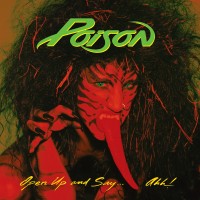 
Even though I primarily listen to the heavier side of metal, I've reviewed and enjoyed a fair few glam metal albums over the years; indeed, I have a somewhat soft spot for the over-the-top, 'so cheesy it would kill a lactose intolerant person', pop rock that glam offers. In three years reviewing albums I never got round to the creme-de-la-crap that is Poison, a band that even glamsters acknowledge as the cheesiest of them all.

So how did Poison come to earn such a reputation? Well, if you can bare to open the album up after seeing its cover, then you will understand how. Open Up And Say... Ahh! is the kind of album you enjoy despite how bad it is, having a naive charm to it that endears itself to you in an odd way.

If there was a musicial equivalent of Maslow's hierarchy of needs, then Poison knew how to game it to their own advantage. Sure, they couldn't hit the higher parts of the hierarchy with their limited abilities, but they ensured to scratch the lower parts consistently enough to seemingly get a passing grade.

From the fun and upbeat party anthems of "Back To The Rocking Horse" and "Tearin' Down The Walls" to the better-known "Nuthin' But A Good Time" and power ballad superhit "Every Rose Has Its Thorn", each track is empty calories, yet somehow you can't help but indulge on them on occasion (however, much like empty calories, they are best left as occasional snacks).

C.C. DeVille offers imitation rock riffs, with the likes of "Good Love" and "Fallen Angel" presented well, but having little meat on the bone. However, in service of the song overall, his playing fits well and, well, they work when a part of the bigger picture. The same can be said of Rockett and Dall; they offer little individually, but the songs couldn't work without them.

Of course, you then have singer-cum-reality star Brett Michaels, the lightning rod atop a lightning rod. Frontman aside, in the context of this album review, he is a passable singer, though one that cannot convey emotion through his voice. If AI were to develop a vocalist then Micheals would be it, for he ticks the boxes on tracks like "Love On The Rocks", but does so in unconvincing fashion. Say what you like about less technically proficient singers, but if you can't connect with your audience then you fail at the basics.

So why should you enjoy Open Up And Say... Ahh! if it is as flawed as I say? Well, despite all the shortcomings, the band ensure to write a catchy hook and a track that you carry on listening to despite its low quality. "Nuthin' But A Good Time" perhaps epitomises this; the lower end of the hierarchy is hit so squarely and powerfully that you can't help but revert to it for a quick dopamine fix.

Written on 07.01.2023 by
omne metallum
Just because I don't care doesn't mean I'm not listening.
More reviews by omne metallum ››