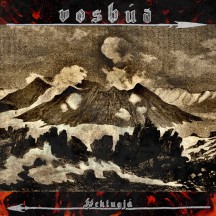 
Haters will say that Radu only reviews one-man bands this year, which has been true so far, but no more. This one has an astounding two members!

Sure sure, it's only one of them who does the music while the other only does vocals, which is about as close to a one-man band as a two-man band can get. Also you could pigeonhole me once again for having to cover every Icelandic black metal band I come across. Yes, that's also a valid point, but I think I'm overestimating how anyone but me would care about my reviewing habits, so let's talk about Vosbúð instead. For as incestuous a scene as the Icelandic black metal scene is, the two members don't seem to be part of any other bands. Maybe it's due to their relative anonymity, maybe there's actually more than 10 people in Iceland making black metal.

Vosbúð resist diving too much into dissonance the way their compatriots do, and even if the sound they tackle isn't very innovative, there's more shades to it. There's a very strong pagan/viking undertone both in some of the melodic tendencies as well as the occasional choirs. There's still some dissonance and a long-form cymbal-ridding Mgła worship. There's some progressive tendencies, and some weirdly upbeat sections like the interlude in "Aska sigursæl". There's sections with a tighter atmospheric focus, which works well with the general long-form songwriting. So, as a whole, there is more than meets the eye that goes into Heklugjá, and there's some clear ambition with the shades that the band approaches.

However, the band doesn't completely master all of the elements it tries to put into their self-described "Volcanic black metal" sound, and with such a long album it feels like they were a bit overly ambitious. My biggest gripe lies with the production, which is about as horrible as production can get without being overly amateuresque, which does make the listening experience unnecessarily grating to sit through. Couple that with the usual "buildups with unsatisfying climaxes" and you're left with an album that has a lot of the elements that it would need to hit, but mixed in a way that keeps it from having the impact that it could.

As frustrating as listening to Heklugjá can be, it still has plenty to offer despite its flaws, and I do root for Vosbúð overcoming them in the future.

Written on 11.01.2023 by
RaduP
Doesn't matter that much to me if you agree with me, as long as you checked the album out.
More reviews by RaduP ››